Megxit: Prince Harry and his wife, Meghan Markle, to “quit” the duties they’ve been assigned as their Royal Highnesses, the Duke and Duchess of Sussex. In an Instagram post on Wednesday, the couple said that they will try to “become financially independent” as they balance their new lives between Britain and North America.

So how will that work? It will be hard to predict due to lack of precedent; no one has ever voluntarily resigned from the royal clan, other than those who have been exiled or fired. Edward VIII had to abdicate the crown in order to marry an American socialite divorcée, and most recently, Prince Andrew’s decision to step back from royal duties over his connections to Jeffrey Epstein, a sex offender. 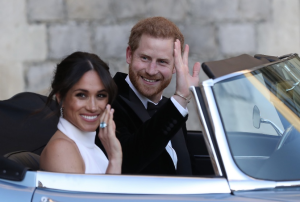 Photo Caption: Prince Harry and Meghan Markle after the celebration of their wedding.
Photograph: REX/Shutterstock

Prince Harry and Meghan have had to deal with the intense media scrutiny that comes with being a new royal couple since their marriage in May 2018 and having their adorable son, Archie, in 2019. With their sudden departure from their royal positions as Duke and Duchess of Sussex, the press has made it their first priority to file stories about their finances and how the queen would handle the defection.

Meghan’s difficulties with her American family and disagreements among her in-laws were published constantly in the tabloids. She has had to deal with her father, Thomas Markle Sr., creating drama for her in the press. From the back-and-forth with TMZ over whether he’d attend her royal wedding to Prince Harry to several interviews that were damning to Meghan’s character, Thomas attempted to find every opportunity to victimize his daughter in the media. Eventually, when the demand for interviews stopped and the money dried up, he made an effort to reconcile with his daughter to repair their relationship, but it was too late.

Instead of adopting the British tradition of remaining resolute in catastrophic circumstances, Prince Harry and Meghan proved that they did not intend to play by the old rules. For example, the prince, who lost his mother to a horrific car accident, spoke openly about the emotional difficulties that he ties directly to the early death of his mother, while Meghan made sure to speak of the struggles that comes with her current role as Duchess of Sussex.

In October, the couple filed a lawsuit against The Mail on Sunday over the publication of a private letter from Meghan to her father. Prince Harry released a fiery statement against the U.K newspaper for what he described as an extremely painful journey for his wife to endure while raising their first child. The Prince said, “For these select media this is a game, and one that we have been unwilling to play from the start…I have been a silent witness to her private suffering for too long. To stand back and do nothing would be contrary to everything we believe in.”

The couple’s decision to withdraw from the royal duties should not come as a surprise, though it appeared to be just that to the rest of the world. Evidently, it would seem bizarre to withdraw from the life of wealth and power, but the Duke and Duchess of Sussex proved everyone wrong, including the Queen of England. To label Prince Harry and Meghan as traitors for abandoning the old order would be an exaggeration, but celebrating them as the creators of the next installment of the royal family seems to be a better solution.

Hello! My name is Aliyah Hanif and I’ve been in love with writing for as long I can remember. I have embraced my culture with the use of developing my own creative pieces in order to express who I am. Writing has given me the opportunity to give my own personal opinion and deepened my knowledge on certain issues to change the perspectives of others. I hope that I will be able to express my views on the many events that occur in society. From political conflicts to changes in our school, I will do what I can in order to highlight how important it is that we talk to one another. Trying new things and going on adventures whether it’s in the city or right here, in Queens, I look forward to expand my knowledge and to try things that I would never see myself doing. Besides writing, my hobbies consists of dancing, cheerleading, watching movies, and shopping!