Seamless, one of the first ever companies that capitalized on people desire for delicious food without having to stray too far from the couch, turns twenty years old this December, and to celebrate they’re pulling out all the stops.

With Seamless about to reach their twentieth year of business, they’ve certainly passed the test of time and seem to be showing no signs of slowing down. According to Grubhub, their app has led to over a billion food sales, and not hard to see why with their easy to use interface that gives access to thousands of restaurants all over.

Jamaica high school senior Jananatul Amey agrees and said, “My experiences with Seamless have been good. It is easy to use, makes life convenient, and the delivery rates are much cheaper when compared to other food delivery apps.”

To commemorate their success they’ve decided to celebrate all year long, that means that for the rest of the year Seamless will be coming out with several prizes and events. Their first event was held back in February where people had the chance to win twenty years of free Seamless, yes that right twenty years and several second prize winners had the chance to win a year’s worth of Seamless. Sadly the contest has already come to a close back in early March, but there’ll future events and opportunities to win prizes. 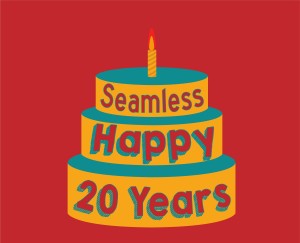 To commemorate Seamless’ 20 years of business Edison is giving them a cake drawn in their art style.
Credit: Byron Quinteros

As you’ve probably seen on the many advertisements scattered across NYC, Seamless has made their main home here, and it’s quite fitting being that the city that never sleeps probably doesn’t have the time to take a lunch break. To commemorate their long-standing service towards NYC they’ve recently released an animated advertisement titled “Seamless’ Fueled This City.” The one-minute long animation plays a parody of the song “We Built This City” as it follows animated versions of Seamless workers traveling across NYC’s 5 boroughs. Starting in 1999 all the way to the current day the animation shows off several major events that happened in NYC’s long history and how Seamless has managed to deliver through them all. According to the Drum( a publication that is used to connect clients to companies dealing in creative works) that animation was created in partnership with BBH NY, Hornet production studio, and award-winning director Andy Baker. The short is also full of little easter eggs like the infamous Pizza rat, they also had some easter eggs that were specifically aimed towards New Yorkers like the subway cart dancers, a t-shirt that referenced the NYC blackout of 2003, and a poster for the Broadway show Mama Mia.

They may be a multi-million corporation now, but things weren’t always so bright, originally a startup by Paul Appelbaum and Jason Finger under the name SeamlessWeb the company struggled a lot in its early days. In the article Jason Finger of Seamless: The Random Idea That Sparked a $100M Business reporter Katie Morell is able to conduct an interview with Jason Finger. The article gives insight into not only Seamless’ past but also the early stages of developing a company. Jason recounts of how he originated the idea of creating an online menu service after working in a law firm and constantly collecting takeout orders from his fellow employees, the idea was originally marketed towards companies as a way to cater food for their employees without having to reimburse them directly. He also goes into how the rise of the corporation was slow and painful with him having to spend his nights working customer service calls after spending his days calling banks and restaurants pitching his company. Although things did seem to pick up after the corporation was bought in 2005 by ARAMARK, at this point they’d become a standard consumer product.

The climb for Seamless over the past twenty years is an impressive one, to say the least, and with the advertising, it wouldn’t be too much of a stretch to think that they’ll make it another twenty years.

“Jason Finger of Seamless: The Random Idea That Sparked a $100M Business” https://www.americanexpress.com/en-us/business/trends-and-insights/articles/building-an-empire-jason-finger-of-seamless-com/