When we sit down in the morning to enjoy our breakfast of bacon and eggs or a dinner including our favorite meat, many of us do not realize the effects of environmental harm and animal cruelty it takes to produce our food.

For every pound of flesh, a cow must consume 16 pounds of vegetation. Raising animals for our consumption uses over half of the water alone in the United States. Vegetation must be grown, tended to, and fed to the cow before it is brutally slaughtered, prepared, packaged and finally shipped off to its destination to be purchased by consumers.

Another main source of food that that we get from cows is dairy, and more specifically, milk. After a calf is born, they are usually ripped away from their mother within one or two days. Cows produce milk only after giving birth, just like all other mammals. Females cows in the dairy industry are usually impregnated every year so they keep on producing milk, while the baby calves are fed steroids or synthetic formulas which is obviously detrimental to their health. Female calves are usually grown to lead a life just like their mothers, while male calves spend their entire life of a few months confined to small crates to be slaughtered and sold as veal.

Chickens in the meat industry will almost always have the clipped off, this prevents them from injuring one another or themselves from being in such close quarters. 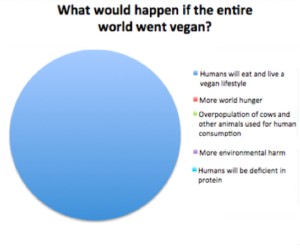 A few out of the many misconceptions about vegans.

You may think there is a difference between caged and cage-free eggs, but truthfully, the differences are little to none. Chickens will never be able to roam around and never see the light of day. Just like female calves, female chicks are born to live the faith of their mothers, but unlike male calves, male chicks are usually thrown away or ground up alive soon after birth just because it is cheaper than raising them to be killed for their meat, as seen in the Earthlings documentary.

Even though this is just a small portion of animal cruelty acts being committed, there are also many environmental cruelties. According to the Environmental Protection Agency, raising animals for food is the main source of water pollution and 85% of soil erosion is a direct cause of the meat industry. Over 80% of corn and 95% of oats grown are fed to animals for our consumption. The population of cattle alone in this world eat the same amount of food needed to feed 8.7 billion people, which is more than enough food to feed the earth’s entire population.

Humans were physically not made to consume animal meat and animal byproducts. We are natural herbivores with dull teeth and nails, we have a lot of more teeth than a meat eating animal to chew our food rather than swallowing whole, small jaws, and our lack of ability to chase after prey and desire for raw meat. Unlike carnivores that have long, curved and sharp canine teeth, humans have short and blunt canines. In fact, the largest canines come from the hippopotamus, which is a herbivorous animal. Canines are often used as a defense to scare predators, it doesn’t mean that that animal consumes meat. There have proven to to be very little, if at all any benefits from eating animal products that we can’t already obtain from a vegan lifestyle.

Remember that all living beings have a right to be on this earth, just like us. We all have the same senses, the ability to feel pain, to see and hear other animals crying out in pain knowing that they will too, suffer the same horrible fate.

Note: All the facts stated in this acticle are from peta.org and Earthlings, a documentary.