Ninja is located at 25 Hudson St, New York, NY 10013 and is an underground restaurant in Tribeca that offers Japanese Cuisine including sushi. At the restaurant, the waiters are hired to play the role of ninjas by doing fire and

magic tricks, replicating the stereotypes of Ninjas, and having the overall aroma of the restaurant fit this arcane maze theme. The waiters are always enthusiastic and keeping the crowd going! When first entering the restaurant, you step into the lobby then enter an elevator that takes you to the underground restaurant. There is festive Japanese music played and dimmed lights for effect with the walls looking carved to suit the underground secretive look. 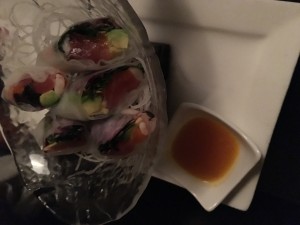 Batto Jutsu, an appetizer for the Sasuke Set which offers three appetizers and a choice of two entrees for $68.

The average price for an entrée is $28.00 however the portion size of these plates suit the pricing as well as the shows that come with each dish. They serve dishes like chicken teriyaki, steak, salmon, and sushi platters and even offer a kids menu. Their signature dish is called Katana priced at $50. Katana is an angus steak with teriyaki sauce, fried risotto and Alaskan king crab served with tomato mango sauce topped with white sauce and melted cheese that serves two people. They also offer a make your own feast option called the Sasuke set which comes with three appetizers and two main dishes and a side of corn, broccoli and french fries for each dish. 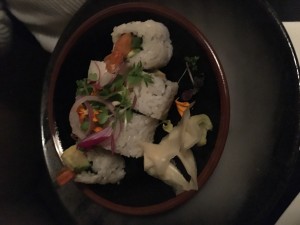 Famous shrimp tempura roll served as an appetizer at Ninja for the Sasuke Set which offers three appetizers and a choice of two entrees for $68.

Alisa Das, a senior commented, “I would pay $30 at this restaurant because it sounds like a once in a lifetime experience type of thing. The price seems to accommodate a low including a show by our waiters and the theme itself, it sounds like a great place to go and hang out with friends.”

As Alisa said, this is an experience everyone should have in their life! To feel a part of an underground ninja association exposed to their tricks and ways of life and to enjoy some delicious cuisine!