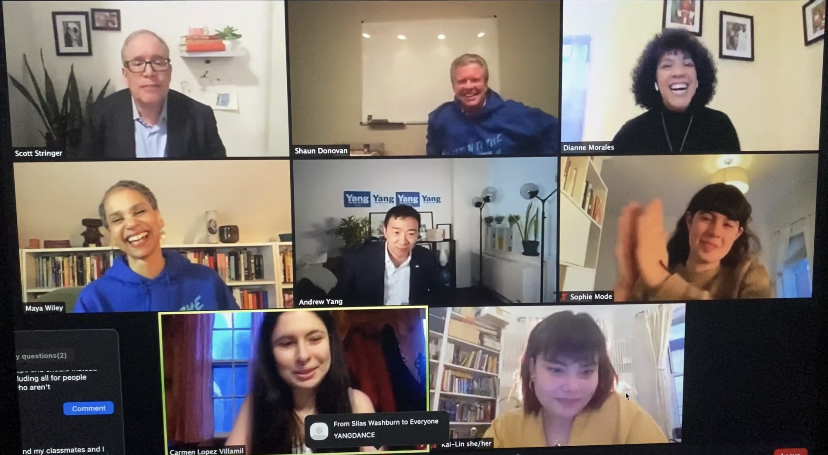 Many different ideologies will be clashing this year in New York City. That is because of the upcoming New York City Mayoral Election. A record number of new voters, especially students who recently turned 18, are expected to turn out to vote.

New York City is a solidly Democratic city, so the next mayor is almost guaranteed to be a Democrat. That means, though the general election is on November 2nd of this year, the Democratic Primary on June 22nd will be much more significant and will essentially pick the next mayor of the city.

Who exactly are the candidates running for the office? All of the top Democratic candidates attended a student-led mayoral forum on March 4th. Among names among the attendees were Shaun Donovan (Former Director of the U.S. Office of Management and Budget), Dianne Morales (Former social services non-profit CEO), Scott Stringer (NYC Comptroller), Maya Wiley (Former chair of the NYC Civilian Complaint Review Board), and Andrew Yang (Former Presidential Ambassador for Global Entrepreneurship and candidate for the 2020 Presidential Election).

When asked about her plans to increase school diversity and deal with the trauma that comes with overcrowdedness and low funding, “We need trauma-informed care in our schools,” Wiley said.

A student asked Stringer about his plans to end geographic screens to tackle racial inequality. In response, he said, “What I would do is eliminate the geographic screen at the high school level permanently;” then continued by saying, “We can’t keep kids locked out by silly screens,” in regards to the racial inequality that comes with the screens.

Another student pressed Donovan on metal detectors and police in schools that target Black students at a much higher rate than any other racial group of students. “I will get the police out of our schools; that I would stop the use of metal detectors and other ways that we militarize our schools,” Donovan said.

Morales was asked about the use of suspensions in New York City Public Schools. These suspensions can be up to 180 days long and can strip students of a whole year’s education, especially minority students. Morales responded saying, “I think we need to abolish suspensions; they are clearly the beginning of the school to prison pipeline; they are not being used in a way that is helpful or constructive at all.”

Lastly, Yang, who joined the forum about half an hour late, was asked whether he would eliminate the New York City Specialized High School Admission Test (SHSAT) due to its aspects of racial and economic inequality. “I think we should include it, but include it in a whole host of factors,” Yang said.

Later on, the student organizers asked the candidates to answer two practice SHSAT questions. Due to unknown reasons, however, Yang immediately left the forum despite being the only major candidate in favor of keeping the SHSAT.

What do the actual voters have to say? Syed Matin, a youth leader for the civic engagement organization DRUM NYC who was not on the forum, weighed in on the overall topic of the election by saying, “As a non-believer in electoral politics, it is rather difficult to weigh in.” Matin then continued by simply saying “Nah” when asked whether he believes whoever is elected will keep their promises or not.

Istiak Rahman, a current senior at Edison High School, is leaning towards current Brooklyn Borough President Eric Adams. Adams was not present in the first session of the forum. “His plans for post-pandemic rebuilding. I like that he’s focused on more affordable housing and handling the eviction crisis,” Rahaman said.

There are still months left before the elections. Only time will tell who gets the youth vote.

Hi folks, I’m Navid Iqbal. I’m a Computer Networking student, but I hate it. I love to study political theory, philosophy, and history. Also, I debate white supremacists and incels on omegle.