Do Advanced Placement (A.P.) courses need a class textbook? The textbooks you’re given in class offer the same amount of information found on the web. The difference between the book and internet is all due to the layout of the information. Some people can process text in an auditory, visual, or tactile manner just by taking a simple Learning Style Quiz. Nevertheless, most AP students utilize websites such as Salman  Khan’s breakthrough in education, Khan Academy, and a less known website known as getafive.org. Both websites can assist students on their way to acing the May exam.

No matter how much you cram, the internet is not always going to be your lifeline. On rare occasions the textbook may have just the information you need. Perhaps your were stressed and that could have caused you to glance over the topics your trying to comprehend. It happens to many students. They waste precious seconds of studying time turning pages when a simple Google search can get the information you need in a more efficient manner. Whether you choose to embrace the textbook or toss it under your bed, just remember that your school gave it to you without asking for payment. This raises the question as to whether or not if the DOE (Department of Education) is a charitable organization? They didn’t distribute the book for emotional gain. The New York State Education Law Section 701 clearly states that students are allowed to receive a textbook which were loaned to them by the state.

According to The Laws of New York Consolidated Laws Education Title 1: General Provisions, Article 15 Textbooks Education (EDN) Section 701 states, “Power to designate textbooks; purchase and loan of textbooks; purchase of supplies;In the several cities and school districts of the state, boards of education, trustees or such body or officer as perform the functions of such boards, shall designate text-books to be used in the schools under their charge.” In other words, you, a student, have been receiving a free textbook to make use of. Yet many don’t care about this notion of a free book. 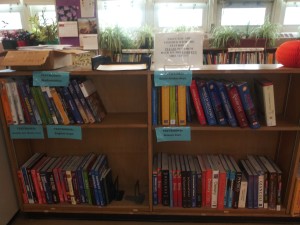 Library stores textbooks. They are neatly shelved and placed according to subject.
Photo Credit: Nicholas Suresh

Some teachers will recommend students to buy supplemental material in order to have a solid understanding of the content. Others will even print handouts from separate textbooks and utilize them for their daily instruction. Such is the case for Bonnie Weckstein. I recently interviewed my Government Honors teacher to gain insight into this textbook dilemma. I also interviewed Stacy Conway, who is the head of Edison’s math department; and supervises the A.P. exam.

I asked both of them whether or not students cared about receiving a textbook.

Ms.Weckstein said, “ they’ll care about the book when there is homework assigned!”

In order to convince students that using their textbooks is a benefit rather than a drawback, Ms. Conway said, “the textbook has more information available for them. It has other examples to help you study from.”

To conclude the interview I asked each individual about the ways A.P. students can study and prepare for the A.P. Exam. Ms. Weckstein discussed how the A.P. government exam is difficult to pass since 48% of students nationwide fail.

“Trying to understand court cases is a big part of the test.” Ms. Weckstein further said, “The biggest problem I see is that students are involved in so many activities, which means they are going to cram, and that doesn’t work. I had this issue two years ago with a student who was involved in SkillsUSA.”

As for Ms. Conway, she said, “STUDYING, attending class, doing practice problems, and making sure you understand the information” are essential to passing the class and acing the exam. “Don’t keep moving on if you don’t get it. Start from the beginning.”

My name is Nicholas Suresh. I write for the Features section of The Edison Light. I think reporting about unexpected things is what makes my section stand out from the others. In my spare time, both my brother and I study karate at the Jaribu System of Martial Arts.