From April 17th to April 19th, 2018, the Thomas Edison C.T.E. High School’s HOSA: Future Health Professionals Club traveled to Syracuse to attend the New York State Spring Leadership Conference. This conference was a competition during, which competitors are asked to complete various health and leadership tasks for medals and other awards.

The Thomas Edison C.T.E. Medical Assisting teacher, Dr. Savitzky, took a group of twenty-five students who accumulated a total of thirty-two medals and four other awards during the competition, which was a new Thomas Edison record.

“I think every time that we win at these competitions, it gets the kids more excited and they start to ask more of their friends. So, because we had such a great result last year when we went to states and we got to go to the competition after states; we go to what’s called the International Leadership Conference. Last year it was held down in Orlando at Disney World. The kids came back from states and from nationals talking so much about it that it increased my membership of HOSA members at the school this year,” said Dr. Savitzky, ”27% of the members this year are actually students who are not in Medical Assisting.”

“At the beginning, it was very nerve wracking. Like, my hands were sweating. Me and my whole group were nervous, anxious, and had butterflies in our stomachs. Slowly, once we got in there, it got more fun and enjoyable. The good thing is that the opposing team was very nice, they were understanding as well. It was a good experience, and I would recommend it to anyone, even if they’re not in the healthcare field because you get to go against other schools and people that you have never met and you realize that they are really nice. It is a nice experience, and it is really fun,” said Salma Benitez, a junior at Thomas Edison, when describing the competition.

After the conference, the Edison HOSA: Future Health Professionals group came up with several words of advice based on their experience at the New York State Spring Leadership Conference for students who are looking to enter a competition.

“I think that waiting last minute and being nervous is something that really impacts how you do when you are competing. So, I would say, right before you go and compete, you take a nice well rested nap instead of staying up late and you practice for a little bit, but go to sleep feeling confident instead of stressing yourself out and self-doubting,” said Sofia Abadali, a student in Medical Assisting.

Maisha Uddin said, ”Everyone prepares, but I would suggest that people don’t over prepare because, for things like an interview or like a poster, you really have to stay true to your style because sometimes when you over prepare, you kind of underestimate your personality and how effective it can be in the competitions. It’s really important to know that you should show what you are, as a person…” 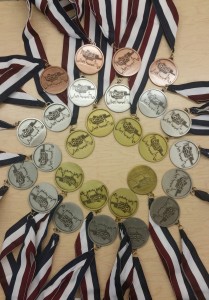