Imagine sitting down for your school lunch. You didn’t have time for breakfast this morning, so your lunch is the only fuel left to get you through your grueling afternoon classes. As you chew through your PB&J, the peanut butter makes it hard to eat without a drink in hand, but without thinking, perhaps in your zombie state, you grabbed the milk. And you’re one of the 48% of Americans who are lactose intolerant. Too bad there aren’t any other drink options.

Ever wonder why you’re stuck with a carton of milk that most people are not even drinking? It’s not that your school hates you. Federal mandates are in place to serve milk along with lunches. As long as it contains an entree, side dish, and fluid milk, it’s technically a viable school lunch. In extension, some schools are forcing kids to take every part of the lunch, even the portions they can’t eat.

Even though just under half of the Americans can’t even digest lactose, a sugar present in milk that causes irritation and digestive issues, milk isn’t going anywhere off the menu. The United States Department of Agriculture ensures that a carton of milk is with every school lunch.

The USDA has been in charge of the school lunch program that first started in the forties. Unsurprisingly, the board contains members of the agricultural industries. Specifically, meat, egg, and dairy industries. Selling more products is a priority, so they market milk as the healthiest source of calcium around, despite science claims around this. Dr. Nicholson, a member of the Physicians Committee for Responsible Medicine explains, ‘”Anyone who is eating a good variety of vegetables, particularly dark green, leafy vegetables, has access to enough calcium which is actually much more efficiently absorbed in the gut than the calcium in milk,” he continued, offering a reason for the medical emphasis on calcium supplements.”’ It’s not a stretch for me and you to understand. What benefit is there from drinking the milk of another animal?

The USDA KNOWS this, but having us switch over to water or fruit juice or any other alternative won’t make their profit. As a result, they hire scientists to “advise” them on their policies. Known as research lobbying, as long as these organizations publish reports in favor of the policy, then the policy can stay and claim its science-backed.

Not only is it a bit shady, but it also doesn’t take into account the needs of our growing country. America is more racially diverse than it’s ever been. According to an article published by Brookings, “The new estimates show that nearly four of 10 Americans identify with a race or ethnic group other than white, and suggest that the 2010 to 2020 decade will be the first in the nation’s history in which the white population declined in numbers.” Not only are we growing as a country with more people, which means more people to feed, it also means more waste. A study published in 2017 found that 45% of milk offered at breakfast is wasted, amounting to an estimated $274,782, or 16% of the food budget for the School Breakfast Program. But there’s no use crying over spilled milk, right?

You may be thinking that if there are so many kids who can’t drink milk, and so many kids who don’t even WANT milk, why doesn’t someone just pretty please politely petition the USDA to take it off the menu? Simple, right? Not exactly. Representatives in congress receive donations from interests groups and businesses, and the dairy industry is no exception. According to OpenSecrets, an organization following lobbying groups across America, dairy industries spent 6.6 million dollars lobbying in 2021. The biggest of these groups included Land O’ Lakes shelled out over 2 million dollars last year.  As long as money continues to flow into these legislators’ campaigns, milk won’t get off the menu any time soon. 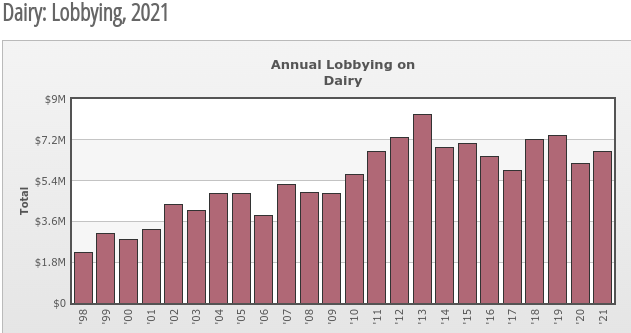 Milk has long been a staple of our school lunches, but it’s high time we set the record straight. It’s not benefiting anyone except the industries that keep it on our plates. Milk being taken from cows and prepared for us just to be thrown out is wasteful. However, it wouldn’t be right for us to force it onto a tray of someone who can’t drink it. We should update our lunch standards to better reflect the needs of our growing children.

Salutations! My name is Rizwana and I’m a big news fan. Journalism is so important to me because it establishes the art of fair, comprehensive coverage as a universal constant. To write is to breathe. I have always felt liberated by the pen. I wish that by covering general news I can gather information that is consumable, and free. Viva creativity!