The 10th-grade students in Global History attended an assembly on March 6, during which speaker Lena Goren, a Holocaust survivor, spoke to students about her experiences.

At the age of 11 years old, Goren’s village was invaded by the Nazi’s, who took her father into questioning and whether he would return was a mystery.

“Any day the Germans would come and take us away,” Goren said.

Her father came back with news that the trains were coming to pick up all of the Jews. Goren and her family, alongside 83 other people, walked through the night until they got to a monastery with monks living there. The monks refused to help the group because hiding a Jew could lead to being brought to the camps as well. Soon after, a group of men from a militia helped the group by pressuring the monks, allowing for the group of run-away Jews to have shelter and a hiding place away from the Germans.

For 18 months Goren, along with her family and the other 83 people, lived in poor living conditions within the monastery; there was a lack of food, proper bedding, and no bathrooms.

Goren said, “My mother worked as a seamstress, at a nearby town, and would bring back food, like olives and raisins… My mother would make bread and other foods and we would have to split it among 83 other people.” 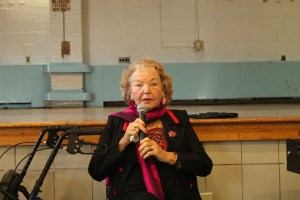 Every time her mother left the house it threatened our safety and risked the Nazis finding us. Once the war was over, her neighborhood was a ghost town; many had gone to Israel or perished in concentration camps.

At 16 years old, she and her family got sponsored by her aunt, who was living in America. Goren didn’t want to move to America, she preferred Israel because all her friends and neighbors had fled there. In Israel, she believed she would find some of her old friends. Instead, she moved to America and “lived the American Dream.” She learned how to speak English and grew up to work as a seamstress; she lived in Queens with her children, and husband.

Several of the 10th graders were moved by Goren’s experience and wisdom she had to share.

Devin Baines, another sophomore, stated, “I was heartbroken and nervous to hear her miraculous survival story. She has lost dear ones to the Nazis.” 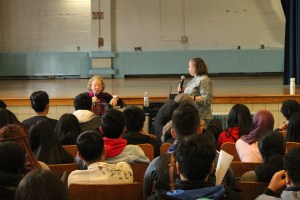 Goren presented a story of hope and new beginnings, although she lost most of her family members in the Holocaust. She remembers those that helped when no one else would and is thankful for the life she was given.

Hello! My name is Aliyah Majid-Todd, I am apart of the Web Design CTE course. I enjoy learning, and being kept up to date, with current events. I hope that writing in the General news section will shed more light, on events and activities, that students are interested in, or may need to know.