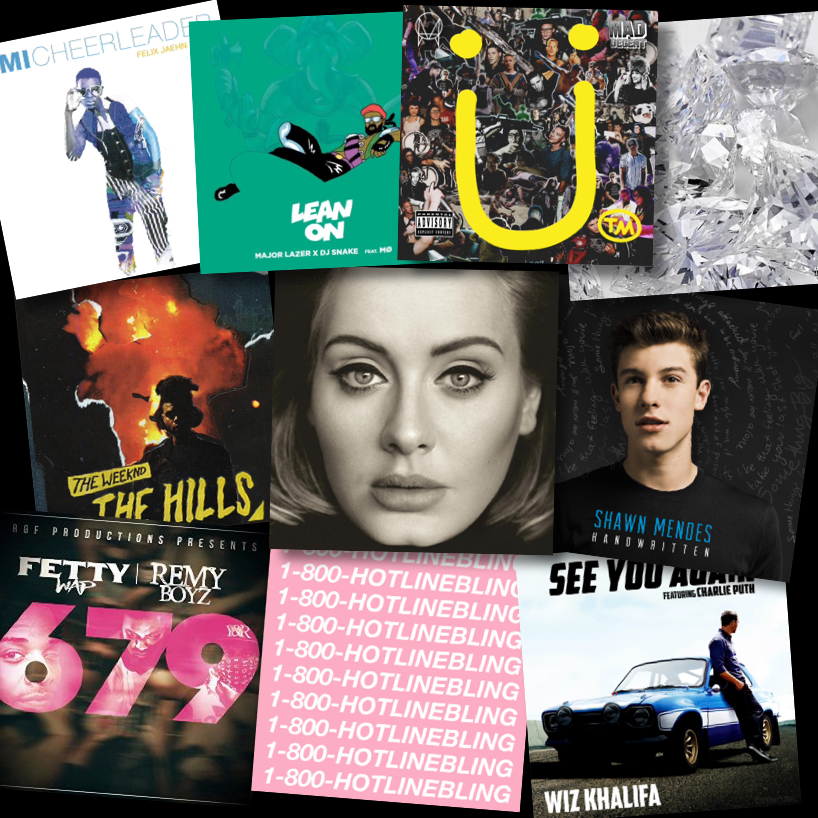 A college of the most popular songs of 2015.

In 2015 we’ve seen the appearance of new artists, the comeback of artists and most importantly the birth of new music which have gotten stuck in our heads whether we liked it or not. There have been some songs in particular which have shown a great outcome among listeners, which have become the top 10 songs of 2015.

This song was featured as one of the songs on the Fast and Furious 7 soundtrack and was dedicated to Paul Walker after his death. It has been on the Billboard Hot 100 Charts for 41 weeks and has received numerous awards such as Teen Choice Award for R&B/Hip-Hop Song and Teen Choice Award for Choice Song from a Movie or TV Show in 2015.

2. Where Are U Now – Skrillex and Diplo Ft. Justin Bieber

This song has been on the Billboard Hot 100 Charts for 42 weeks ever since it was released. It was certified platinum in the US and was within the Top 10 internationally in countries such as Canada, Australia and the United Kingdom. They won Best Collaboration at the MTV EMAS 2015.

It was named the most streamed song by Spotify, with 526 million streams globally. As of December 2015, the official music video has 944 million views on YouTube. Currently it has been on the Billboard Hot 100 Charts for 37 weeks. It was ranked 48 on its year-end list to find the 50 best songs of 2015 by Rolling Stone and listed number one on Billboard’s Top 10 Dance/Electronic Songs of 2015.

This song popular among young couples and lovers was first developed in 2008 in Jamaica but hit became a global success in 2015. It first topped the charts in European countries before making its way to the United States. It has been on the Billboard Hot 100 Charts for 35 weeks and received the Danish Music Award for International Hit of the Year.

One of the most popular songs from The Weeknd’s new album, Beauty behind the Madness, has been on the Billboard Hot 100 Charts for 30 weeks. During the first week of sales, there were 109,000 digital downloads and 5.2 million streams globally. His inspiration of the song came from the 1977 horror film called “The Hills Have Eyes” and weaves his Ethiopian background throughout the last verses of the song.

This Canadian teen pop artist released this song which was the third single on his debut studio album, Handwritten. It was certified Platinum three times by the Recording Industry Association of America in December. It has also spent 30 weeks on the Billboard Hot 100 Charts and currently is number 9 on the charts.

Fetty Wap’s second single from his self-entitled album instantly became a hit during the summertime with over 3.4 million streams and 86, 000 copies of the song sold globally. This song was first released on Fetty Wap’s soundcloud in 2014 but was re-released on WorldStarHipHop in 2015. It spent 25 weeks on the Billboard Hot 100 Charts and is currently number 11.

This song is famous for the line “you used to call me on my cellphone, late night when you need my love…” and the crazy dance moves in the music video which many try to impersonate. 41,000 copies were sold in the first week and became Drake’s first Top 10 in two years when it debuted as number 9 on the charts. As of November, the song has sold 1,335,000 copies and is currently is number 3 on the Billboard Hot 100 Charts.

This was the first single released from Drake and Future’s mixtape, What a Time to Be Alive. This became Future’s highest-charting single as a lead artist. It is currently number 13 on the Billboard Top 100 Charts and has been there for 13 weeks.

Her lead single from her third studio album, 25, which was released after three years of being on a break. It became number one in 28 countries and has had the largest opening sales in three years. It has debuted as number on the Billboard charts for 8 weeks in a row and became the first song with over a million digital downloads in the first week. The music video broke the Vevo Record by achieving 27.7 million views within 24 hours.

Although these songs have shown the most interaction among listeners, there were many songs that have shown character throughout 2015.

Joaly Burgos said “If I could pick one song to represent 2015, I would probably choose Clued Up by Little Mix. It’s just a song about growing up and learning that everything that happens is to help grow you. 2015 was a year where I learned a lot about myself and the world around me.”