The 11th hour, of the 11th day, of the 11th month of 2018 marked the first centenary of the first World War. 100 years ago on that day, an armistice was signed between the allied powers of Britain, France, and America, and the central power of Germany to cease all hostilities on the Western Front, which marked the end of four years of brutal warfare.

This year, the first centenary of the great war was honored accordingly, with leaders from all the nations who participated in the war touring the grave sites of soldiers. Ceremonies were held where everyone stood in silence while soldiers placed a wreath on the tombs of unknown soldiers across France and Belgium to honor those who served in the first World War. Leaders were joined by millions worldwide who honored the soldiers who served in their own ways. Peter Jackson, the director of Lord of the  Rings, decided to honor those men who fought in the war with his revolutionary new documentary, They Shall Not Grow Old.

Made in cooperation with the British Imperial War Museum, Warner Brothers, Fathom Events, Stereo D, the BBC, 14-18 NOW, and WingNut films, They Shall Not Grow Old utilizes technology and good editing to make the best documentary I have ever seen. It was so realistic, and it carried such an impact that I, personally, felt like I was a soldier fighting on the Western Front for a large duration of the documentary. Peter Jackson and his team did an excellent job in creating a narrative, and in their use of technology and sound.

The reason this film is so revolutionary is because of the painstaking-effort that Jackson and his team took to restore hundreds of hours of old war footage supplied by the Imperial War Museum, and the angle that he took when producing this film. You see, the Imperial War Museum asked Jackson to create a unique World War I documentary back in 2014. To do this, Jackson decided to throw out all the “rules” and define the war in terms the non-historian could understand – in humanitarian terms.

Jackson decided that the sole focus of his film would be the experiences of the average British soldier fighting on the Western Front. In a 30 minute long epilogue at the end of the film, Jackson said “The mundane parts of being on the Western Front are the most interesting. These soldiers, they couldn’t talk about the history of the First World War, they couldn’t talk about the strategy and tactics, … There’s one guy who says [in an interview], ‘All we knew is what we could see in front of our eyes. Everything else, to the left, to the right, we had no clue.’ It’s a story you don’t often see in the history books and the documentaries. It’s what they ate, how they slept, how they went to the loo, what the rats and lice were like. The comradeship, the friendship.”
But he did not simply compile a bunch of war film about soldiers on the Western Front, Jackson and his team underwent a painstaking restoration of the film; they used modern editing techniques to fix and stabilize the old film, so that it looked as if it was video taped today. They experimented with the frame rates until they got it “just right.” Jackson said that they could tell when the frame rate was perfect because it, “brought the humanity back to these men.” The humanity was also what drove Jackson to make this film a story about the soldiers. That’s why the film has colourized footage, and why every voice you here is a real veteran describing their experiences. 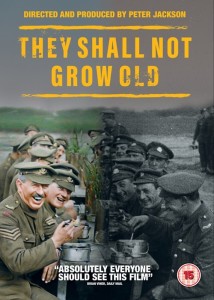 In the epilogue after the film was over, Jackson said he colorized the film because “They [The soldiers] saw a war in color, they certainly didn’t see it in black and white. I wanted to reach through the fog of time and pull these men into the modern world, so they can regain their humanity once more – rather than be seen only as Charlie Chaplin-type figures in the vintage archive film.”

To top it all off, Jackson and his team made sure to get all the sounds right. They want to  a firing range in New Zealand and recorded the sounds of artillery firing and exploding, gunshots, equipment shuffling, etc. For every action that they saw in the footage, they had someone act out exactly what was going on, whether it be putting on a bag or eating soup, and then they recorded it. Every sound effect you hear in the movie was recorded solely for the sake of the movie.

Jackson’s team even went as far as hiring professional lip readers to decipher what the men in the film were saying. They then found out where each soldier in the tapes were from in England, and recorded a voice actor with that specific accent. The music was at a bare minimum too, and whatever music there was; it felt natural. For example, the whistling at the beginning and at the end felt natural, and perfectly suited what was going on.

There was a little bit of background soundtrack during the scenes that Jackson felt really needed it to make them have a stronger impact, or in scenes he felt were too silent and needed it not to break the viewers immersion. Most of this background track blended so well with the scenes you didn’t even realize it was their. The end credit song, “Mademoiselle from Armentières,” was a popular song sung by the soldiers that served, and was fitting for the end of this movie.

Not only is this film brilliant, but it revolutionizes the way the average person will be able to look at and appreciate the soldiers and their sacrifices. Films like these will allow students to understand not only this war, but other wars of the 20th century, as well. By exploring the war from a soldiers point of view, this film is able to offer a level of understanding and appreciation that is impossible to get from textbooks, which focus on the tactical and political side of the war.

Saadab Kaijer, a senior at Edison, who viewed the film said, “After watching this documentary, I feel that more time should be given to learning about not only World War I, but the other wars as well. If my Global teacher would have spent a week on World War I, and played us this film, I feel we would’ve had a greater understanding of the war than the textbook would have ever been able to give us… Barely a chapter is dedicated to both World Wars, while Ancient China gets several chapters. I hope films like this are able to stress more importance on wars in general for students, especially the humanitarian side of war.”

The film aired on British television, and in schools and theatres on the 11th of November, this year to commemorate Armistice Day. It also had limited release in the US on the 17th, but Warner Bros. will also open They Shall Not Grow Old in New York, Los Angeles and Washington, DC, on Jan. 11, with plans to expand to the top 25 markets on Feb. 1, Super Bowl weekend.  I highly recommend you watch this film, you will not regret it. If you want more assurance, Rotten Tomatoes gave it a score of 98%.

It is definitely one of the more fruitful deaths to die for your country. May those who fought or died fighting in World War 1 rest in peace. Their sacrifices will never be forgotten.