It’s been about a month since Rockstar’s long awaited Red Dead Redemption 2 came out, and after having ample time to play it, I have to say the game is phenomenal. The game, set in the Wild West at the end of the age of outlaws and gangs, brings with it a whole slew of new mechanics, beautiful visuals, excellent characters, an exceptional story, and an immersive world that expands off the first Read Dead Redemption. 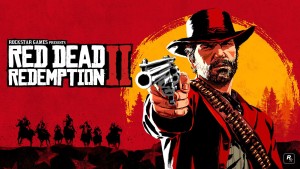 The game offers so many new mechanics that have really cemented its position as one of the best games of 2018.

The story of this game is really engaging and immersive. It’s also filled with content. The story alone will take you a minimum of 65 hours to complete. I’ve casually been playing the game, and after a month, I’ve only completed 4 out of the 6 chapters, not to mention two more epilogues, 31 side missions, over 100 challenges, and infinite number of randomly generated AI interactions throughout the map.
The story is not only long, it’s good as well. I don’t want to spoil it, but this story deals heavily with the themes of comradery, loyalty, and honor, and is honestly surprisingly relatable, which makes this game so much more immersive. If you liked the emotional train GTA V put you on than you will like this game’s story. Zarfred Javier, a senior here at Edison who pre-ordered the game, said he liked the game because the story can be comical, yet sad at the same time. I can confirm this and would like to add on that the story stays relatively lighthearted and comical most of the time, which makes gives the sad and dramatic moments and increased level of impact and tension.
The new mechanics in Red Dead Redemption 2 are a sight to behold on their own. Unlike other open-world games and even previous Rockstar games, you must maintain your characters weight and hygiene. If you don’t eat your character will visibly get skinny, and they will get a stamina boost, but a health buff, and the opposite goes if you overeat. If you don’t eat at all, your character’s health core will deplete faster, causing you to die if you don’t get one-shotted first. Your hair and facial hair will also grow over time, and unlike previous Rockstar games, you can’t magically go from bald to an afro with one haircut. You must grow out your character’s hair. You also must bathe, because if you don’t, the NPC’s will take note of your horrible smell and they will say something, some of them will even refuse to speak to you.
The horse system in this game has seriously been updated. Your horse matters in this game, and if it dies while you are in the middle of nowhere, then you will have to walk to your destination, which will take hours. You must bond with your horse so that you can do tricks with it and so that it is more obedient. The same weight mechanics also apply to your horse. You also must clean your horse occasionally, so that its health core doesn’t drain. You also must worry about your gang’s camp. If you don’t make sure that the supplies are well stocked, then camp morale will take a big hit. Your gang members will donate less, and most will have a negative opinion towards your character.
Your weapon maintenance is important as well. If you don’t clean your guns, they could jam on you in the middle of a fight. The game also includes a whole new fishing feature, and they have revamped the hunting mechanics, making it so that you must track your prey, and use the right kind of weapon to get the perfect pelt. Javier said he personally liked the new interactive dialogue mechanic they added into the game. This mechanic allows you to choose the dialogue you which the character to speak to the NPCs, which adds even more immersion to the gameplay and the story.
The world of Red Dead Redemption 2 is also huge. It expands on the map of the first Red Dead Redemption, adding a whole new section to the map that is nearly 3 times as big. Rafael Gonzalez, another senior here at Edison said he liked that the map was “jam packed” with content, but at the same time said the large map size wasn’t ideal when you don’t have a horse to get around. The map is filled with beautiful scenery and several locations that your character will sketch in his journal. One of my personal favorite locations is the old Civil War battlefield in Lemoyne, south of Rhodes. It paints a very vivid picture of what went down there, with its broken cannons and smashed up trenches. There are many nicer little locations like that across the map to keep you entertained. You won’t get bored of this map for a long time.
One of the things that surprised me the most was how smoothly the game runs, especially for a game of this size. There is only one significant game-breaking bug I have encountered thus far, and that is that certain characters wouldn’t exist in the world unless they had a mission for you. Apparently, this happens when you fail certain missions and restart from a checkpoint. Other than that, I experienced one other minor non-game-breaking bug. The barber icon showed he was available, but he wasn’t there so I couldn’t get a haircut. I fixed that with a simple reload of the game. Javier said he encountered one instance of NPCs phasing through each other, and Gonzalez said he encountered a few voice-over cutouts, but that is it as far as bugs.
Gonzalez and Javier’s main problem with the game was its massive memory requirements. The game is 105 gigabytes, which is a problem for many console players. Javier had to uninstall several games, including Resident Evil, Black-Ops 3, and Battlefield 1. Gonzalez had to uninstall his copies of FIFA 18, Madden 18, and Black-ops 3. I personally had to uninstall Metro Last Light Redux, Assassin’s Creed Origins, and Black-Ops 3.
From the new mechanics to the expansive map, to the immersive story, I have thoroughly enjoyed this game. I rate it a 9.9/10 and would highly recommend it to anyone wanting to buy a game right now.