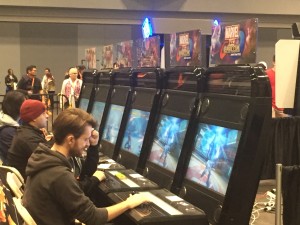 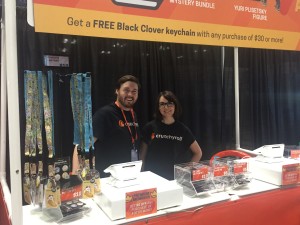 Anime NYC is a new convention that took place from November 17th through November 19th, 2017. The convention was created by LeftField Media and was strongly supported by the online web service Crunchyroll. Anime NYC targeted the Anime community in New York and the tri-state area directly by holding many events that would appeal to the community’s interests. At the convention, there was the Tokyo Attack Arcade which contained a plethora of video game arcade machines popular in Japan; video concerts featuring hits from the MIKU EXPO 2016, ClariS Video Concert: Claris Meets Nippon Budokan and LiSA Video Concert:Live is Smile Always as well as a premiere for two movies; Fullmetal Alchemist (live action) and Gundam Thunderbolt. These are only some of the highlights at Anime NYC for there was a lot to do at the convention over the course of three days.

The Tokyo Attack Arcade was one of the biggest highlights in Anime NYC due to the large crowd it attracted throughout the convention. The arcade itself was divided into three sections; rhythm, dancing, and fighting in which there were games matching the corresponding topics. There were hit games such as Dance Dance Revolution, Tekken 7, Marvel vs Capcom Infinite and Street Fighter 5

Anime NYC attendee Elia Hoang felt that the arcade was a good add-on to the convention itself.  “The competitiveness in people stand out against people a lot. They have Street Fighter so there is going to be a line. They will fight in a competitive environment and if you lose you lose. You still have fun. But for free it works out.” said Elia Hoang.

Unlike New York Comic Con, everyone in line was sure to get a turn on the machine they were waiting for rather than waiting on line for hours with no guarantee that you would be able to play the game. Each multiplayer machine gave participants two plays for every time they entered the machine.

“Even if the line was quite long, just having the experience alongside my friends was honestly a blast. But even if the line took some time, the fact that I played a game in the one with some of my best friends I’ve ever met and glad to have known, really set it in stone for me,” said Daniel Yoon, a student at Thomas A. Edison CTE who went to Anime NYC.

The Artist Alley was another part of Anime NYC that attracted many people in the convention. This was a hall that artists were able to set up and sell their own art in. Not only was there a large crowd of attendees, but there was also a significant number of vendors in this hall. Some stands not only sold their own artwork but they drew commissions of requested images as well.

Former student of Thomas A. Edison CTE, Rameel Iqbal, had attended the convention. He said, “Honestly in terms of artist alley it was set up well and there plenty of artist[s] to be able to observe and purchase merchandise from or to even commission a piece of art from specific artists I honestly wish I could have commissioned myself but didn’t get the chance. In all honesty, the set up they had for the booths was nice and accessible. This coming from a person who was there on crutches, which goes to show that it was good.”

As for any convention, a large portion of Anime NYC was filled with exhibitors and vendors. These stands sold a variety of items related to the Anime culture and industry such as POP! and figma figures, manga, dvds and games. Several vendors made replicas of weapons depicted in games and anime using either wood or a sturdy foam and sold them as well. In the exhibitor venue, there were over a hundred stands available for people to visit. Upon entrance to the convention, participants entered and were greeted with booths from Crunchyroll, Aniplex and Bandai.  Apart from the merchandise stands, there were also unique exhibitors who displayed games or held signings for a particular interest. The voice actors for Blizzard’s Overwatch had a stand in Anime NYC where actors for the characters Lucio, D.Va, Mercy, and Genji  were available for autographs and photos.

Anime NYC has been announced to return in 2018 with the same dates listed as this year.