Looking for a sanctuary from the freezing temperatures? Look no further, Duet 35 is right around Bryant Park.

With the weather fluctuating between cold to high risk of hypothermia, people are scouring for indoor entertainment. My friends and I were one of those people. While walking through the streets of Manhattan (more like huddled really), we stumbled upon Duet 35. We were hesitant to go in, but the harsh cold winds pushed us to step inside.

Duet 35 is a franchise of the company, Duet Karaoke. They currently have three locations at Manhattan dubbed after their street address’; Duet 35 is on 35th street, Duet 48 is on 48th street, and Duet 53 is on 53rd Street. Walk-ins are welcome but considering how busy they can get, it’s better to make a reservation beforehand. Also, they cater to larger groups, their karaoke rooms varying in sizes. 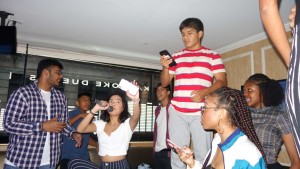 The going rates are pretty fair considering the locations. Do note that they vary depending on the time, the day of the week, and the holidays.

Mind you, none of us were even close to what an average person would call “good” at singing. But that doesn’t matter, as long as you’re with the right company, it can be as fun as going to an amusement park in the summer. Hearing one of your friends “sing” when they’re really talking to the beat of the song is pretty hilarious.

Karaoke isn’t only good for entertainment during the colder months, it can also be an alternative to a stress ball.

Kevin Hernandez said, “I feel like you could just be yourself and let go and sing along to the song and just, you know, be in the moment.”