Glass, the third installment in M. Night Shyamalan’s Unbreakable trilogy has finally been released after 19 years in the making. The film sees the return of fan favorite characters Elijah Price, David Dunn, and Kevin Wendell Crumb. I got the chance to view the film about a week after its release, and I have to say that it’s not one of Shyamalan’s best works, but it isn’t one of his worst either.

Glass picks up the story three weeks after the events of the second film of the trilogy, Split.  From Unbreakable, we see the return of Bruce Willis as David Dunn (aka The Overseer), and Samuel L. Jackson as Elijah Price, (aka Mr. Glass). From Split, James McAvoy reprises his role as Kevin Wendell Crumb and the multiple identities who reside within, and Anya Taylor-Joy as Casey Cooke, the only captive to survive an encounter with The Beast. Continuing off from the end of Split, Glass begins with David Dunn pursuing Crumb’s superhuman personality known as “The Beast” and “The Horde” in a series of escalating encounters, while the mysterious presence of Elijah Price emerges as the orchestrator who holds secrets regarding both Dunn and Crumb. All this happens as Dr. Ellie Staple, a psychologist, attempts to reason with all three men and treat their “disorders”.

Most of the actors in this movie played their roles exceptionally well, especially James McAvoy. He has gone above and beyond to master the role, from the looks on his face to the body postures and random yet systematic head spasms and body twitches, you genuinely feel that Crumb has split personalities. Samuel L. Jackson’s role was also well received. Although not as good as McAvoy’s, Jackson’s performance is spot on and captures the character of Elijah Price the same way he did back in 2000 with Unbreakable. Andy Yax, a senior here at Edison loved the film and he especially liked the actors’ performances. 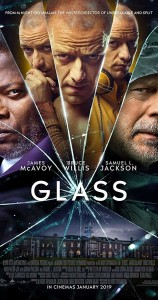 Yax said “They all really captured the essence of the characters that they were supposed to play, especially the returning actors. The guy [McAvoy] who played Kevin Crumb was great, he played the role as if he was insane and it almost freaks me out. But I really loved the Overseer, Bruce Willis was excellent in playing the anti-beast to Crumb. He was straight faced and unemotional, a direct foil to Crumb’s insanity and multiple personalities”. While Bruce Willis does play the role of the foil to Crumb well, I have to say that he is not as engaged as McAvoy was in their fight scenes together. Bruce often looked disengaged, and his face was covered for a large duration of their fight scenes, and I am assuming that this was so that his stunt double could take over for him. Bruce Willis’s performance, although not terrible, could have been better. I attribute this to him aging, kind of like Harrison Ford and his recent performances in Indiana Jones and Star Wars.

The movie was beautiful. Shyamalan hired the right people for visuals, because a lot of the shots in this move are well crafted, and stunning. This is especially true in the fight scenes, where the action was depicting in a way that you don’t often see. The problems with this film begin with Shyamalan’s decision to have the central character of the movie one that we are not already familiar with. This character is Dr. Ellie Staple. Although Paulson’s performance was good, having her character be the central character was a big mistake. She hasn’t experienced the character arcs of the existing character’s like we have, so her being the central character sort of hinders Shyamalan’s ability to further develop existing character arcs. This is evident in the fact the Elijah’s character arc from Unbreakable is barely touched upon or expanded. In Unbreakable, Price is a man desperate to believe he’s not a mistake due to brittle bone disease, and he is willing to play the villain just, so he can have a sense of belonging in the world. In Glass, he sort of remains this way, and his arc doesn’t have a conclusion, or a satisfying one at least. David Dunn’s arc was barely expanded upon. He literally is there just to be the anti-Crumb. And he is off screen for a large portion of the film. It is the same situation with Crumb. This has nothing to do with the performances of the actor’s, but Shyamalan’s writing. He constantly steps outside of the narrative to tell you about his narrative as if he doesn’t trust that we are smart enough to understand what is going on. Some of the fight scenes were interrupted by such narratives. He also spends much of these narratives explaining to us how comics work, as if people in 2019 don’t understand how comics work after years of being made popular by DC and MCU films. The concept of the film, the whole trilogy as a matter of fact is intriguing and original, but Glass suffers from a problem that many modern films suffer from, and that is writing. It seems that the more and more CGI and filming technology improves, the worse and worse the writing for these movies get, and It’s a shame. This movie could have been the satisfying conclusion to a 19-year trilogy, but the ending of this film left many fans feeling that there could have been so much more to these characters than was shown. Yax said this about the ending “The ending definitely caught me off guard, and not in a good way… It definitely falls below what I thought it was building up to.”

The main theme of the film is that the world needs to realize that there are superpowered human beings among us. Take from it what you will, I believe the film was trying to say that if you look deep enough, perhaps you might find some abilities that you never thought you could possess, like confidence or something, despite other people’s attempts to suppress these abilities.

Despite my criticisms of the film, I do believe that the critics are being a little too harsh on this film. It does not deserve a 38% on rotten tomatoes. Although it was not good, it was not that bad, and did have its enjoyable moments. I would say that this film is mediocre at best and deserves no less than a 55%. Would I recommend you watch it? Only if you have watched the last two films, as this one would probably not make any sense to you if you just viewed it alone. Despite its shortcomings, it is the conclusion to a trilogy, so if you want the full story you might want to watch it.