In a limited run performance, classic Asian and Western instruments fuse at Carnegie Hall to retell ancient Chinese folklore in the form of orchestral music. Shen Yun Orchestra incorporates Chinese instruments, the erhu and pipa, right alongside more known instruments, such as the violin and cello. Songs performed in Chinese bel canto, a style of operatic singing, add to the purpose of blending two cultures so beautifully. Scenes of folklore, which are written down for you to follow in a playbill, are recreated with music that allows you to use imagine them as if they were being acted out.

It is a stigma that teenagers are simply not into classical music, but many adolescents disagree with this view. Edy Pacheco, a senior who plays classical music on violin and piano, said “I feel classical music is underrated and misjudged…often classified as boring, but you’d be surprised at how many pieces by different composers are actually quite exhilarating and joyous.”

Although this seems an expected response, even someone who does not typically listen to classical music can enjoy it. “Many compositions are very relaxing and help me calm down or concentrate during times of pressure and stress” said senior Samira Mostafa.

What excites people most about an event like this? People seemed to be most excited to see how the cultures would be blended and were excited that other countries take influence from other countries to fuse them. Pacheco, who has already been to the show, shares that his favorite part was seeing how the musicians enjoyed performing the show as much as the audience enjoyed watching it.

Students may not often get in depth exposure to different cultures. Experiences like this are helpful because they “help people gain more knowledge, become worldlier, and gain respect for other cultures… [they] allow you to appreciate and not appropriate cultures” said Mostafa. 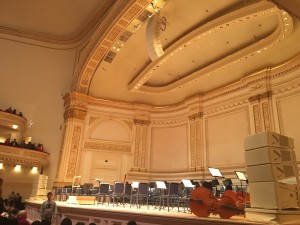 Carnegie Hall’s stage is filled with seats and open music scores, awaiting to be filled with musicians to fill the theater with melodies.
Photo Credit: Marilyn Ramos​​

Hello there! My name is Marilyn Ramos and I am a writer mainly for the Arts and Entertainment section. I love writing, from everything to essays to my own songs which i also play on guitar. I also love singing and dancing. I am excited to share with you experiences that you should definitely NOT miss out on, as well as those not worth spending your money on. Thank you for reading our school newspaper!