Raging bushfires have been devastating the continent of Australia since June 2019, and these uncontrolled serious fires have been taking their toll on the land, people and wildlife there. The Australian bushfire season, while being a common occurrence, has been much more detrimental than it has in the past. Whether this may be due to the rising climate problems our planet is facing, or the difference in wind currents, the continent is in serious trouble and needs drastic help.

So far, more than 35 people have lost their lives to these fires, along with damage and/or destruction to about 5000 homes. These statistics clearly demonstrate the sheer power of these rampaging fires. Unfortunately, not much is being done for the continent, and things were looking quite bleak, despite many donations made in efforts to try and help.

Fortunately, there is hope, in an unlikely form. A social media influencer,  Kaylen Ward (@lilearthangelk on Twitter), took matters into her own hands by tweeting, “I’m sending nudes to every person who donates at least $10 to any one of these fundraisers for the wildfires in Australia.” 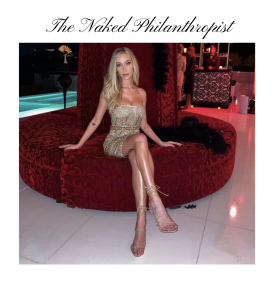 Photo Caption: Kaylen Ward, dubbed The Naked Philanthropist for her heroic acts in a not so normal fashion.
Credit: Twitter

This sent followers and other people on twitter in a frenzy to donate to the cause in hopes of getting a -private- image from Kaylen Ward. She motivated hundreds of people to donate to a good cause, and ended up raising $700,000 to $1,000,000 to organizations, such as Australian charities and evacuation centers. She became the hero Australia needed, and stepped up more than other celebrities ever would.

Many people on the internet saw her actions as “shameful” and “pathetic,” comparing it to prostitution and slut-shaming her. She tweeted later after the money was raised, “My IG got deactivated, my family disowned me, and the guy I like won’t talk to me all because of that tweet. But **** it, save the koalas. (via her Twitter)

Hello, my name is Abdullah Mansoor. I have been passionate about writing ever since I learned how.