Nintendo’s recent release of a mobile Mario Kart Tour failed to live up to the hype for most people. On September 25, 2019, Mario Kart Tour, the fourteenth installment to the franchise was released for IOS and Android devices. 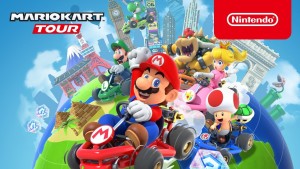 Mario Kart Tour has all the characters we know and love, from Mario, himself to Princess Peach, Baby Peach, Luigi, Bowser and more. The app is quite easy to play as you just slide across your screen to steer and drift.

Players’ enjoyment is limited as the game, known originally for allowing you to race against friends, has no multiplayer option. Yzer Degula, a senior at Thomas Edison and an avid Nintendo fan, is disappointed. “I felt that the app did not live up to the hype because me and many other players expected a free multiplayer Mario Kart game we can play and enjoy whenever we wanted.”

The big issue fans seemed to have was with the no multiplayer option. Even so when racing, you’d be playing against bots instead of real people. Degula continued to add, “I think the game was so popular when it released was that it was a free Nintendo game you would usually need a separate console to play with so having it easily downloadable hyped it up.”

The hype over the release of Mario Kart Tour began since January 2019, when Nintendo first announced the app idea. Ever since then, the hype died down until it officially launched.

Although to some, the game is a bit overrated, other players enjoy playing regardless of the no multiplayer option. Benjamin Hakeem, another senior at Edison has a different point of view. When asked his opinion of the mobile game, he said, “I think it gets the job done. That’s that game. But the controls feel weird, it doesn’t feel right to me.” Hakeem also described the game as “addicting” even though it lacks complexity. Not all fans were disappointed due to the game’s changing Cup Challenges that swap every week or so. This allows for new exciting races and challenges to complete.

According to Twitter, however, Nintendo will be running a beta test for multiplayer by the end of the year. For those who have Mario Kart Tour’s Gold Pass, they’ll be given early access to playing against their friends. Hopefully, fans will be getting what they want soon and Mario Kart Tour can finally live up the original hype.

Hey, my name’s Jennifer Urprasad. I’m currently a Journalism student and writing is something I’m very passionate about. Journalism allows you to shed a light on important issues and topics which is why writing for this website is important to me.