Among the ridiculously lengthy list of content on Netflix, there are some hidden gems that are simply too good to be considered a Netflix original. One such gem is the Outlaw King, a historical drama with very heavy elements of adventure and plenty of action sequences. It is set in medieval Scotland and tells the tale of a Scottish noble’s attempt at liberating Scotland from English rule.
The story follows Robert Bruce, a Scottish noble, who crowns himself the king of Scotland and leads a guerrilla war against King Edward I of England after just losing the first war for Scottish independence. 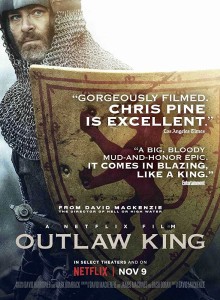 The Outlaw King is Netflix’s latest attempts at legitimizing itself as a film studio in the eyes of the film industry.

Robert Bruce, played by Chris Pine, is accompanied on his journey by his wife, Elizabeth De Burgh, played by Florence Pugh, and his fellow Scottish nobles James Douglas (Aaron Taylor-Johnson), Christopher Seton (Steven Cree) and many others. This story is about the second war for Scottish independence in 1306.
There is some serious talent in this movie. Most of the cast played their roles to their fullest, especially Billy Howle (Edward, the Prince of Wales) and Aaron Taylor-Johnson (James Douglas). The characters they were playing were crazy and frightening and they really conveyed this through their acting. Chris Pine (Robert Bruce) also played his role excellently. He was nonchalant and confident for many of his scenes, showing that he has the characteristics of a king, but also shows his emotions when his friends and allies are in trouble.
My biggest issue was with Sam Spruell (Aymer de Valence, 2nd Earl of Pembroke), but that has more to do with the way he looks rather than his acting. No offense to him of course, but in most of his scenes, he had this look on this face that really distracts you from his acting, which wasn’t bad at all. Harry Chin, a senior at Edison said he had a problem with Florence Purgh’s (Elizabeth De Burgh) acting. He said she went from being awkward to loving and ready to die for Chris Pine’s character way too fast and felt forced. I agree that her emotions did feel forced; however, I believe that is more the writers’ fault for not developing that relationship further, rather than Purgh’s fault for not acting well enough.
The movie was very entertaining, overall. I especially liked the scenes of the ridiculously outnumbered Scotts looting and pillaging Scottish castles in a guerrilla-like manner to evade the English.
Another scene I liked was when Edward, Prince of Wales, was trying to get Elizabeth to forsake her husband, Bruce. Edward was screaming at her to sign a sheet of paper to forsake Bruce, and while he was screaming, he said “Bruce will soon be dead, so sign it”, and she responded, “If he will soon be dead, then why force me to forsake him.” She then realized that Edward has no idea where Bruce is, and started laughing instead of crying as she had been doing. Edward then shoves her into one of the cages that hung from the sides of castles and left her there to die.
One of the things I had an issue with was when Bruce was delivering taxes and he saw the body of William Wallace hung and quartered outside of the English castle. He saw the people rioting, went back home and said to the other Scottish nobles, “We have to break the treaty and break free.” The movie literally just showed us them surrendering, and then starting another war again.
Historically, there was a two-year period in between the wars for Scottish independence, but in the movie, this gap is five minutes, and it’s very hard for the viewer to catch on.
Kevin Liang, another senior at Edison, said “I didn’t like the climax of the movie, where about 600 Scotts on foot fought off what looked like over 10,000 English cavalry and won.” And I must agree with him. The numbers did look a little ridiculously disproportionate, but I think this was done to heighten the dramatic tension we as an audience feel for our heroes.
This tension is also heightened as the story sets up loyalty as one of its themes. You are either with Bruce, or against Bruce. And we see many of the Scottish nobles prepared to die for Bruce, whom they see as a brother. This adds a level of relatability that increases the tension when some of these characters are put in harm’s way. Liang said he felt the suspense when Edward of Wales found the castle where Elizabeth and Robert’s daughter were held, and he was uncertain about what Edward was going to do to them.
When asked if he would recommend this movie to someone, Chin responded by saying that he didn’t think this movie was that good, because of how fast the pacing is, and said he would recommend it to anyone who finds themselves on Netflix with nothing to watch.
On a scale from 1 to 10, I would rate the Outlaw King a 7. It’s a decent movie compared to most Netflix originals. It offers a decent story with a very strong cast and shows how much potential Netflix originals can have. I must agree with Mr. Chin, in that the movie’s pace may be a little fast for some audiences, but I would definitely recommend to anyone browsing through Netflix without a clue about what to watch.