The show  “Dynasty” is a reboot of a 1980’s prime time soap. It is a story of two fighting families who are excessively wealthy and one that was robbed of their family’s earnings. Currently, there are 3 seasons, 2 of which are available on Netflix. 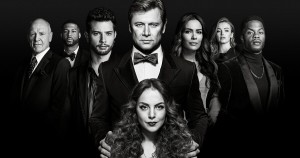 “Dynasty” shows the rage, anger, jealousy, and happiness that can exist in families. It shows the clash of various families, cultures and traditions. It is an eye-opener to many as they feel that these things go on between many families. It’s more of a jealousy that does exist in families when there are no boundaries or set role models.

Reshma Dhanraj,  a senior at Edison said, “Dynasty is one of the best shows on Netflix. It makes you want to keep watching and in every episode, there is some sort of suspense.”

One of her favorite characters in the show is Fallon. “Fallon is so fierce, determined and charismatic. She never gives up for what she wants and although she may seem conceited, she cares.” Reshma also mentioned that she looks forward to season 3 as there is no idea of what’s in store.

Riyaadh Imran, a senior as well said, “It is hard to find shows of interest, but Dynasty is a show that has a mix of everything. It has compassion, arguments, love and hatred. As the show goes on, it becomes more and more interesting. I like how at every end there is a twist which makes it dramatic.”

My name is Ashley Adhar, I enjoy writing about fascinating things about life. I’m fond of trying new things and going on adventures. I look forward to sharing life’s experiences with you and shedding light on everyday matters whether it be on social media or on the news.