Diwali, which is known as the festival of lights, was celebrated during the annual motorcade, parade and cultural show in Richmond Hill on November 7, 2015. On one of the darkest nights of the year, this annual motorcade ignited the streets with joy and most importantly lights. 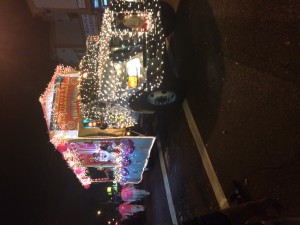 The motorcade began on 133rd Street and continued down Liberty Avenue for all to come and see. The entire motorcade began with a Hawan ceremony which is when offerings are made into the fire and prayers commence. Then the large, brightly dressed floats made their way down the dark streets, trailed by many followers and spectators. On the floats held many kids and adults dressed as Gods and Goddesses such as Mother Lakshmi, who is the main reason for the celebration of Diwali. Not only were the streets filled with lights but also live tassa, where many people gathered to dance. Tassa is a collection of drums which is popular among West Indians during the times of celebration.

Lights are the most recognizable aspect when it comes to Diwali because of the deep and historic meaning to anyone who celebrates it. Those who celebrate place candles or dias which are made out of clay that illuminate the outside of their home and protects them from spiritual darkness.

“My favorite part of the motorcade was the overall vibrancy of the whole place; the bright and colorful lights were a great way to end the day.” Says Jonathan Seegobin.