Anyone who grew up watching DCU remembers the show called Teen Titans about a ragtag team of heroes doing what all heroes do, kick ass and take names. Now DC has taken that piece of our childhood and gave it a deep dark twist in the new DC show TITANS. It’s the same character but each with a more “mature” and darker storyline and although the show has its moments, it is a diamond in the rough. And like all raw diamonds, it needs to be polished.

Season 1 of TITANS follows the story of the four core members of the team as they come of age and discover their purpose in life. This includes Dick Grayson (Robin/Nightwing) , Rachel Roth (Raven) , Gar Logan (Beastboy) and Kory Anders (Starfire). Each character has to face their inner demons and the occasional literal ones too to understand who they are.

It starts off with Dick and Rachel, a young girl embroiled in a darkness she can’t control or understand. Along the way they meet Kory and Gar and together they create a makeshift family, something they each haven’t experienced in a long time. 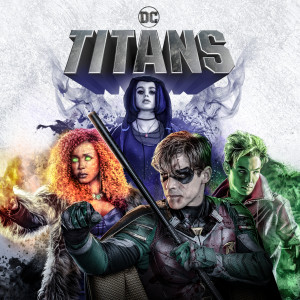 Although the show brings to life a new perspective to the classic, it feels like it was lacking in ways that could’ve made it better. Long time DCU fan, Rayshawn Archer, has said “They could have focused more on the storyline of raven and her father.”

Raven played a vital role in the show and her storyline felt a little rushed or even overlooked considering how the biggest villain was her father, Trigon. The story dragged on to the final battle just for the season to end with a huge cliffhanger that had more to do with Dick than Rachel herself. I feel that they focused a little too much on Dick and his demons”, says Archer.

Although Dick played a rather significant part in the story, every other character’s stories seemed to be shadowed over by his.

The show mostly followed Dick’s story but, it was still well done. The fight scenes would leave you replaying it over and over again, at least 10 times.

“They really knew how to bring out the emotions in certain scenes” said Dylan Ramcharran. The way it’s written and acted out just makes you fall in love with the characters. Dylan described it as “quality screenwriting”.

DC’s Titans brings a wave of excitement and drama to the screen. Yes, it needs work, but what show doesn’t. The show is worth giving a shot for everything it’s given so far.

Hello my name is Muktadir Reza. I aspire to be a professional journalist and I enjoy writing poetry. I plan on being an active member of the Edison Light and write relevant and interesting articles, hopefully.