We are currently going through a war between Ukraine and Russia, which most people know about. But with the Oscars coming up will people forget about what is happening?

Stand-up comedian Amy Schumer is hosting the 2022 Oscars and doesn’t want to avoid any current events, and wants to make a statement. On her appearance on The Drew Barrymore show, she says that she wanted Ukraine President Volodymyr Zelenksyy to appear and talk about the ongoing invasion in Ukraine. 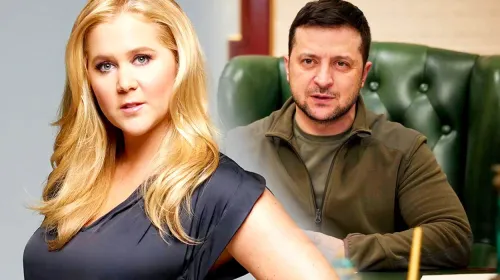 “I actually pitched, I wanted to find a way to have Zelensky satellite in or make a tape or something just because there are so many eyes on the Oscars,” Schumer said during an appearance on “The Drew Barrymore Show,” where she was promoting the 94th Academy Awards.

She also continued saying that even though it’s an important topic to talk about, she has a couple of jokes that she would want to throw in that highlight what is happening in Ukraine and Russia.

Schumer understands that people will want a night off and forget about it and have a great night but she still thinks it’s something that should be talked about since a lot of people will be watching.

“I think there is definitely pressure in one way to be like, ‘This is a vacation, let people forget we just want to have this night,’ but it is like, ‘Well, we have so many eyes and ears on this show.’” she said.

She has also mentioned that she’s not afraid to tackle hard subjects. “I am not afraid to go there, but it’s not me producing the Oscars,” she said.

It’s obvious that Schumer’s heart is in the right place and wanted to show support to Ukraine. But as the show went on air, she has been getting criticism, saying “ that’s completely ridiculous does she not know that he is trying to save his country… he has no time to appear on the Oscars… the Oscars is a small thing compared to what he is going through.”

As of yet, Amy has not gotten an answer about her pitch but is still determined to get Zelensky on the Oscars one way or another.

My name is Ajrin Chowdhury. I am currently a senior at Thomas Edison High School. I write for the General News section on the Edison Light. I chose this topic because it keeps people updated about current events and what is going on in the school. Since I’m in the Graphic Design shop I love drawing and doing art while listening to music. I enjoy watching TikToks, Netflix, trying new foods, and traveling.