It is extremely difficult to find success in the music industry as an artist. Alec Benjamin’s story begins back in 2013, when he was dropped by his first record label. Having previously dropped out of college, Alec turned to the hustle that every artist ventures into when they hit rock bottom.  He would play in parking lots outside of popular L.A concert venues in hopes to gain any magnitude of attention. Here, Alec handed out business cards with his information in hopes to attract gigs. Through this Alec was able to gain momentum and was eventually signed by Atlantic Records.

A great deal of Alec’s support throughout this journey has had to be streaming platforms, such as Spotify. Here, he has gained millions of streams that have tremendously increased his popularity among the states and throughout the world. One of his more popular singles “Let Me Down Slowly,” received 2 million streams in the first week, and now has accumulated over 200 million on Spotify alone. Let’s now dive into the mind of the “narrative,” to witness the genius that goes behind his hit songs. 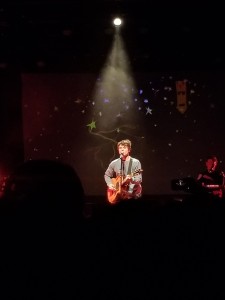 Alec Benjamin singing “Water Fountain” in front of an audience of about 1,500 people at Irving Plaza.

Many artists tend to base their songs off personal stories and Alec does so too. However, he adds his own touch of seasoning to his music that allows many listeners to deeply connect to the lyrics, as many have passed or are going though what is portrayed in his songwriting. “Let Me Down Slowly,” “If We Have Each Other,” and “If I Killed Someone For You,” are all songs that are narrated by his own experiences and have been modeled into the album Narrated For You, who’s single purpose is to put one into their feelings. The way that Alec Benjamin executes his music to fit the ear of many is impressive. For this reason, I have bought tickets to go see him in person on April 11 and witness first hand a rising pop sensation.

The concert lead to a roller coaster of emotions. Although the wait was long and our feet were exhausted from standing, it was definitely worth it. As he appeared from the darkness and onto the gleaming spotlight, the crowd screamed in excitement. He started with his hit song “Outrunning Karma” and the crowd began to sing in a synchronized voice. He kept the night alive by playing throwbacks and portraying the significance of every song, burying the crowd in a pile of feelings and emotions. He wrapped the night by playing his most popular songs, leaving   the crowd with sore feet and an amazing experience.

Alec’s recent success has been a reflection of his perseverance, from playing in parking lots to dropping out of college to pursue what he loves. His recent album Narrated for You has output some amazing songs that are worth a listen. Let’s hope that after his tour Alec keeps creating more concert worthy songs as he did not let anyone down in last night’s performance.