It’s time to grab your Pokeballs because a wild Pikachu has appeared in theaters and he’s itching for some action. Nintendo’s famous franchise Pokemon has made a new installment into their already vast library of media adding to it a live-action movie called Detective Pikachu.

Detective Pikachu takes place in the wonderful world of Pokemon bringing to life its creatures through the use of CGI. Longtime fans of the franchise will be surprised to know that instead of following the adventure of Ash Ketchum, or Red( two of the series most famous characters); the story follows Tim Goodman( played by Justice Smith) as he teams up with a talking Pikachu (voiced by Ryan Reynolds) to try and solve the mystery behind the disappearance of his missing father.

Tim is a character who has lost interest in anything to do with Pokemon so when he is forced to team up with a Pikachu that is essentially a fuzzy Sherlock Holmes it creates some tension. As this unlikely pair works together a lot of comedic moments ensue, but ultimately you get to see as these two characters eventually see eye to eye.

The decision to make the plot a stand-alone story from both the games and the T.V. series allows more people to be easily immersed in the world of Pokemon without having to know anything previous. Although the story is geared to appeal to everyone, longtime fans of the series will be happy to note that there are plenty of references to the games all over the place.

The actors did a phenomenal job of bringing this world to life, but the most noteworthy of them all is Ryan Reynolds, the voice of Pikachu. When word first got out the same person that played Deadpool a psychotic anti-hero would be playing Pokemon’s mascot more than a few people were concerned, but after seeing Reynolds performance I’m more than happy to say there was nothing to worry about. Reynolds deep voice was definitely something that caught people off guard, but when mixed with his cynical humor it only added to the comedic aspect of the movie and helped bring the hard-headed detective to life. 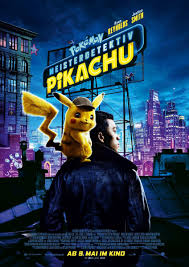 After watching Reynolds performance I can’t picture anyone else more perfect for the role, and I’m not alone, senior Jean Garcia had to say about Reynolds, “Ryan Reynolds is the perfect actor for Pikachu due to his amazing combination of funny and heartwarming in his voice, something that defines all of Pokemon.”

Besides the skepticism over the cast list, there was also controversy over the use of CGI, people complained that the Pokemon would either look extremely fake or look so realistic to the point that the Pokemon look less like magical creature and more like genetic monsters. I found that CGI that was done allowed for the world to come to life in a way that I could have never dreamed of before. The creators of the movie didn’t just concentrate on making the main stars of the movie look great, but they took the time to add extensive Pokemon to the background and really breath life into this world.

To help immerse the viewers even more the creators of the movie spent a lot of time studying the habits of real animals. A scene that perfectly captures this is when the dynamic duo is walking through the forest and you get to see as a wild pack of Bulbasaur pass by and interact with another pack of Morelull that are lying in the ground.

Although the CGI did succeed in making the world seem realistic, there were some Pokemon that were less than appealing. A Pokemon who I wouldn’t mind having redesigned would be Jigglypuff, normally recognized as being one the franchises cuter characters its rendition in the movie made it seem more like the stuff of nightmares.

For a movie that received a lot of controversy over some of its major decisions, I feel that it did an incredible job to tell the story that it planned to. The characters were enjoyable to watch and it’s clear that a lot of meticulous time and care went into the project. So far it seems that movie has been well received by fans especially in Japan where ticket sales during opening week rivaled that of Avengers: Endgame. I have to say I give Detective Pikachu seven gym badges out of eight.