If you’re a person who claims to have a sweet tooth, it’s time to re-evaluate what that means. Kellogg’s has recently released a limited-edition cereal based on Easter’s most famous treat, Peeps marshmallows.

The cereal features three spring-inspired, brightly-colored, marshmallow-flavored cereal crisps and white marshmallow pieces. Interestingly enough, nothing in the cereal is actually shaped like Peeps marshmallows, not even the actual marshmallows, which seems like a lost opportunity. Who wouldn’t want to look down at their bowls and see little chicks and bunnies swimming around. On the back of each box, there is also a small board game that you can use your standard boring marshmallow pieces to play with while you get ready in the morning.

The cereal has generally been received very well, the only real issue deterring people is the amount of sugar. As one would expect when you take something like a marshmallow that is generally already full of sugar and then create a cereal around it people are going to be concerned. 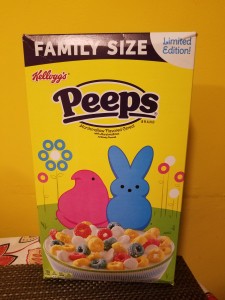 Senior Nikola Catlak said, “I probably wouldn’t eat it often, maybe once on Easter morning… Obviously, I would assume there’s a load of sugar, if I’m wrong then whoopy.”

Sadly that’s not the case here. Each box comes with eighteen servings, and each serving contains thirteen grams of sugar, that means one box has 234 grams of sugar or just a bit above half a pound. If that’ not concerning to you, keep in mind that unlike popular belief a bowl isn’t a serving size it about three to four; you’re really eating about thirty-nine to fifty-two grams of sugar.

This is really a treat that should be saved for the Easter, or for anyone who thinks that they have a sweet tooth that can handle it. With major retailers like target carrying it for less than $3, it’s at least worth a taste before they disappear for good.