Robots haven’t taken over the world yet, but the recent advancements in artificial intelligence show that they might! Almost everyday, a new form of A.I. is being introduced to people all over the world. In many homes, people can shout commands to little machines, like the Amazon Echo, and casually get responses back. Our own smartphones have built-in virtual assistants and face recognition technology. There are many examples of A.I. that make our daily lives easier and more efficient, however many people fail to realize that the emergence of A.I. has brought upon negative effects along with the positive ones.

Some forms of A.I. definitely make everyday tasks easier and assist in completing tedious tasks. They are able to do things that humans can’t do themselves like explore parts of the Earth and other planets. For instance, the Mars rover, Curiosity, has an A.I. system installed to analyze images the rover takes itself.  A.I. also benefit businesses by providing data to them and is a proven game-changer when it comes to assisting medical professionals. For example, earlier this year, a company called M3dicine released a device that uses A.I. to get precise information about a patient from their heartbeat.

Shumi Debnath, a senior at Edison, believes that “A.I. should be used positively for advancements in the medical field in the future.” Alternatively, she also thinks that A.I. “can be negative, turn on you, and even attack you.” 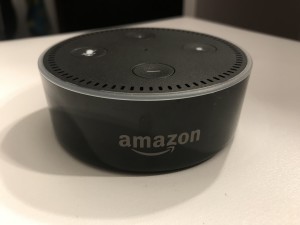 The Amazon Echo is considered to
be an “always on” device which
can be a threat to privacy.
Credit: Parsha Zaman

Advancements in A.I. is also leading to widespread job loss. The introduction of self-driving cars, machine automation, medical A.I., and even police robots, may seem fascinating at first, but the effects they have on job losses are detrimental and will continue to be so. Artificial intelligence is leading people to become more dependent on technology. Being too dependent on technology to do everything would eventually make people inattentive.

While there are many positive effects of the emergence of A.I. such as advancements in the medical field, we have to consider the negative ones as well, like the invasion of privacy.

Hi, my name is Parsha and I write for the tech section. I am currently a senior in the Web Design program. I’ve always been intrigued by how technology works and I want to become a software engineer because of my interest in tech. I hope I can share fascinating tech-related info with you as the school year goes on.