What is the first thing that comes to your mind when you hear the word “metal?” In most cases, you may expect something heavy, sturdy, and solid. On the other hand, the micro lattice created by Boeing challenges this notion. 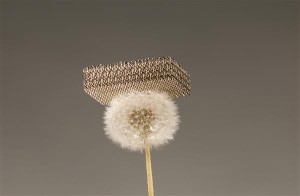 The Boeing’s metal may seem delicate, but it’s sturdier than you may expect. It can be used to absorb the momentum of an egg when is dropped so it doesn’t crack. This metal may be used in aircraft to save weight to be more fuel effective. There is speculation that in may be used for car parts because it can be produced quickly for more convenience.

Anthony Ramdut said “It would help in automotive by replacing heavy metal parts which gives the vehicle better control and direction stability. It can be used to stop vibration and insulate heat while making the vehicle lightweight.”

The Microlattice metal may be lighter than a dandelion, but it shows great strength for its size and weight.