It is the start of the 2018 NFL season. So far, numerous calls were made by the referees for “Roughing the Passer,” against several teams. This has sparked a lot of controversy. Many have been debating whether or not these calls adequately apply to the rule and properly fit the current situations.

In week two, the Minnesota Vikings prepare to face off against the Green Bay Packers in Lambeau Field. Both teams are hoping to become victorious by the end of this matchup. Nearing the end of the game, it was clear to many viewers that the Packers easily had the game in the bag, for the very reasons that they were leading by eight points over the Vikings and that Packer’s cornerback Jaire Alexander had just intercepted a pass from Vikings’ quarterback Kirk Cousins. The interception was overturned and the game had a very different and unexpected ending. This matchup in particular is one of the few games that demonstrate that it is up to the referee’s crucial penalty calls that will determine the outcome of the game, not the team’s and player’s skill levels.

With only a minute and forty-five seconds left in the fourth quarter, the Packers were leading with a score of 29 to 21 over the Vikings. Now, it was the Vikings’ turn to possess the football. As Cousins passed the football deep to one of his potentially open wide receivers, he was immediately hit by Packers’ linebacker Clay Matthews. Matthews hits Cousins with an adequate amount of force that led to both players lying on the ground. Cousin’s deep pass was intercepted by Packers’ rookie cornerback Jaire Alexander. If this turnover were to stand as called, then the Packers had a pretty good chance of winning the game. However, that did not turn out to be the case. Referee Tony Corrente announced that Matthews is penalized for “Roughing the Passer,” which gave the Vikings 15 free yards and a second chance at a possible comeback. 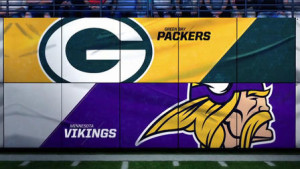 Each new week brings a whole different story for each NFL team. This match-up in particular between the Minnesota Vikings and the Green Bay Packers was quite a doozy.
Photo Credit: NFL.com

Many viewers at the time thought that the call was not justified. Jonathan Mui from Thomas A. Edison High School said, “I believe that the referee’s call regarding ‘Roughing the Passer’ against Clay Matthews is not justified because from my perspective, Matthews never drove Cousins into the ground. The current rule for ‘Roughing the Passer’ should be changed in order to prevent any ambiguity. Nowadays the referees are protecting the quarterback too much.”

The Vikings used this second chance to their full advantage. With the help of Cousins and the Vikings’ offensive line, the Vikings were able to march down the field, score a touchdown, and try a two-point conversion (which was successful). Now, the game was tied at 29 a piece and it was the end or regulation. During the extra period/overtime, which lasted for ten minutes, the Packers didn’t have much luck scoring. As for the Vikings, they had two opportunities to win the game. Both of these opportunities were chances to successfully score a field goal, but Vikings’ kicker Daniel Carlson missed both of them. So, the result of the game was a tie between the Minnesota Vikings and the Green Bay Packers.