Entering week 14 of the 2018 NFL season, the Dallas Cowboys have a record with seven wins and five losses. For the past few weeks, the Cowboys performance on the field was getting better and better. They won the last of their four games, now enabling them to have a shot at making it to the playoffs. Both the offensive and defensive sides of the team really stepped it up, which lead to the over success of the team. On the offensive side of the team, the Cowboys are making good improvements on both their pass and run game. On the defensive side of things, the Cowboys have been stepping it up by making great tackles, creating turnovers (forced fumbles), and intercepting the ball from their opponents.

This week, the Cowboys will be facing off against the Los Angeles Rams in hopes of being victorious once again and being able to maintain that beautiful winning streak. This game is really important for the Eagles because they too need a victory from this game to also keep their playoff dreams alive.

For the first three quarters of the game, both teams’ offenses were very limited with both team only amounting to a total of 15 points. It was not until the very final and fourth quarter did things start to kick off. Feeling the pressure of the environment, each team managed to score many points, constantly going back and forth. After the 60 minutes of playing time was over, both teams had the same amount of points: 23. Now, it was up to the overtime period to determine the true winner of the game. The Cowboys were the first and only team to possess the ball in the overtime period. On a clutch play, Cowboys wide receiver Amari Cooper caught the football after it was deflected by Eagles defender Rasul Douglas and was able to run it into the endzone, score a touchdown, end the game, and come away with a win.

Many Cowboys fans are now hyped-up regarding the very bright future of their team. Cowboys fan Shariq Raihan strongly believes and argues that “the Cowboys do indeed have a chance to claim a spot in the playoffs and potentially make it to the Superbowl and win it all.” He also said that “at the end of the day the Cowboys will keep improving and not mess up at all.”

After all, the impossible can turn out to be possible. It is only up to both destiny and time to determine what will actually happen and who in turn will be the most successful team and the true victors. 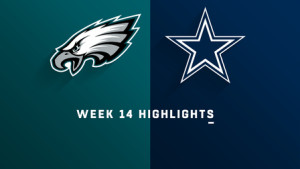 Caption: It is week 14 of the 2018 NFL, where the Philadelphia Eagles prepare to face off against the Dallas Cowboys in AT&T Stadium. Both teams are seeking for that difficult win in order to preserve their dreams of one day making it to the big stage: the playoffs.