On March 15th, 2019 a shooting occurred in New Zealand in two Mosques in the city of Christchurch. The terrorist posted a live-stream video of the killings that happened.

Senator Fraser Anning of New Zealand gave a statement blaming Muslim immigration for the massacre. A teenager named Will Connolly smashed an egg on the Senator’s head, which led to Connolly earning a certain degree of notoriety. Senator Anning reacted violently and slapped him. 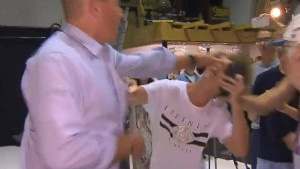 Senator Anning’s reaction after getting egged on the head.
Credit: Herald Sun

Since Senator Anning slapped Will Connolly, people have been agreeing with the idea of impeaching him by creating petitions and even taking the situation to court. Even the Prime Minister of Australia, Scott Morrison, believed that the Senator should be charged for smacking the teenager. Morrison told many reporters from SBS news that, “the full force of the law should be applied to Senator Anning.”

According to Business Insider, an online petition was created for Anning’s removal of Senator and it has gained more than 1 million signatures, however the Senate cannot remove Senator Anning unless he is convicted of crime.

“Reading the statement brought a lot of anger in me knowing that he actually believes the massacre was the cause of Muslim immigration,” says Naima Mahfuz, a senior at Thomas A. Edison C.T.E. High school.  “The senator should honestly resign especially since his reputation is sort of viewed differently now after slapping a 17 year old,” said Mahfuz.

“I’m honestly glad that the teenager egged him because the Senator deserved some action after making that statement,” said Brandon Ally, a senior at Thomas A. Edison C.T.E. High school. “It would be good for him to resign but I doubt he feels sorry for what he did to the boy,” said Ally.

My name is Suhana Shelley. I write for the opinions section and I like the ideas of many controversial topics to share the opinions I have. Learning new things is what interests me so I also enjoy hearing other people’s opinions as well to broaden my mind.