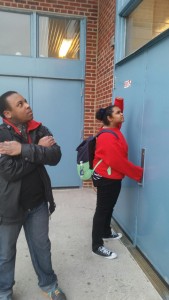 Frustrated students waiting out in the cold before school begins.

7:00 AM and it’s the usual morning lineup students still seem to be ignoring the “open at 7:30 AM only” rule and are coming to school before the doors open, which leaves them waiting in the cold.

Before the 2015-2016 school year, students were allowed to enter the building before 7:30 AM, but now have to wait outside. One might think that students would learn their lesson by waiting out in the cold more than once and decide not to come back so early, however that simply isn’t reality.

Kathy Parsaram, a junior at Edison, usually waits outside of the school for 20 minutes daily even though she’s been here for the past two years and knows the rule. “My dad drops me off before he goes to work,”Parsaram said.

She went on to say waiting outside is  “pointless because we can come in here and sit in the cafeteria instead of out in the cold.”

When asked if she knew the rationale behind the new rule Ms. Parsaram said, “I guess so people don’t have to watch us here, or have the responsibility of having all the kids around here.”

While many students feel like they have to wait in the cold, rain, or crowded corridor, there are many local cafes or delis that a student can wait for school to open while also getting a warm breakfast. However, students like Parsaram and Dayaram would more likely tough it out and face the wait.

Many of the Edison students leave home early to catch an early bus or else they’d be too late for the first period. Yet, they all still become frustrated when forced to wait outside. None, however, seem to know the exact reason behind this rule and have never been told either

Mr. Boxer said, “The reason the 7:30 AM rule is in place is because the school no longer has classes starting at 7:00 AM….it has nothing to do with security,  it’s just not allowed to open the doors before school officially starts.”

All schools have specific times they start their day, and Edison’s school day starts at 7:30 AM.  So for those who are frustrated by waiting outside, plan accordingly.

Hi readers- my name is Aliyah Baksh and I write for the Opinions section of The Edison Light. I personally love to share my opinions with anyone who would lend an ear, and sometimes I would get into a lot of discussions about what’s right or wrong. However, everyone’s opinion matters and everyone’s opinion deserves to be heard, that’s why I love to write for this section. I am able to be a voice for the students of Edison. My ambition outside of the paper is to become a teacher simply because I have always had a passion for it. I am also a minor history buff and a major foodie.