For the past year and six months, Edison has been veiled in construction material.  For the first time since then, students and faculty were greeted by a scaffolded free Edison when returning back from Spring break on May 2, 2016.  It was as if we were looking at a reinvented Edison.  Of course, students got their hopes up thinking that Edison would look completely transformed, but quite a lot of improvements were made to the building that may not catch the eye.

Mr. Johnson, Edison’s Custodian Engineer, was an expert on the topic.  He stated, “We used Keltech Construction, our go-to company since the 1990’s, and it was the best architect quality I’ve seen so far.”

From what Mr. John stated said, most of the work was done on the roof of the building.  Externally, they added gates to the roof, along with a new fume exhauster.  Exit doors have also been replaced, and there’s new lighting all around the school.  Air-conditioners that were once broken, are now fully functional, classrooms have been repainted, leaks fixed, and windows replaced. 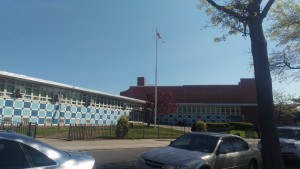 We can finally see the front of our building without scaffolding!​

Internally, a lot of Edison’s understructure has been updated.  Mr. Johnson continued, “A lot of people haven’t seemed to notice the repainted auditorium walls.”

While all of the work that’s been done has yet to be recognized, it will be of benefit to all who spend their days in Edison.  Scaffolding is expected to be down by June 2016.

Aside from all the changes made already, Mr. Johnson explained that, “We are working on a better frontal design on the blue facade.”

In addition to the improvements to the building, there will also be improvements to landscaping, such as removal of dead trees.  It really is a reinvented Edison that everyone will appreciate!