Teachers and students alike, at Thomas A. Edison, agree that favorite classes have a significant impact on one’s life and future. No matter your school experience, there will always be at least one class that will stand in your memory for years to come. Some may view a “favorite class” as just another class that they simply find more bearable than the rest. To many others, a favorite class can often be a source of motivation for a future career or a way of expressing one’s interests in a classroom, all while staying on track with the curriculum.

For numerous students, their favorite class falls within the range of what they expect their future career to be about.

Brian Ortega, A senior at Thomas A. Edison, stated that his favorite class is forensics. When asked if his peers and teacher had an impact on his enjoyment of the class he replied, “They didn’t really affect the class for me. I just always liked forensics and wanna work with that in the future. I didn’t really care about what anyone else did.” Students like Brian aren’t uncommon in Thomas Edison. With a wide variety of shop classes and electives, it’s not uncommon for a student to favor a class that they believe could hold an insight into their future career. Even if your favorite class has nothing to do with your future career, there are ways to incorporate the skills you gained from that class into the career you choose.

An example of this happening is shown by Eric Anderson, A 10th grade Global History teacher.

Anderson explained, “I’m always trying to bring more film theory and art history into my classroom, so there is definitely a strong correlation between my favorite class in undergrad and teaching 10th grade global history. Many of the films I learned about back in college I actually play to my students”

He even recently showed his students Battleship Potempkin, a 1925 Bolshevik film.

“My goal was to teach the kids about the Russian Revolution, while also teaching them about film history and theory,” Anderson elaborated.

It’s clear that Mr. Anderson enjoys mixing what he learned in his favorite class with the class he teaches, but it’s also apparent that the students equally enjoy it. With his students often giving him feedback about how he made global history fun and enjoyable for them, “That kind of stuff makes this job worth it!” Anderson said. 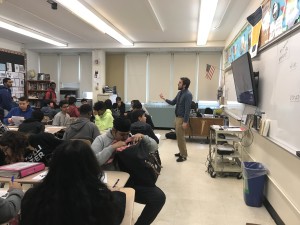