The smoke in the air lingered as it was being puffed by unknowing lips.  Something so amusing soon became lethal. Thousands of people have taken up juuling as an alternative to cigarettes or just for fun.  Little did they know that these Juuls would soon bring hundreds of deaths across the country. 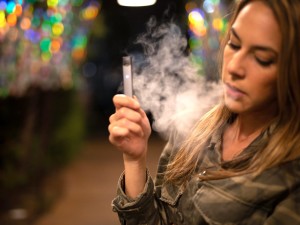 Within the past few months, several young adults have passed away or been admitted to the hospital due to lung failure.  What did all of these people have in common? They all Juuled. Juul has reportedly been lying to customers, claiming that they do not direct their products and advertising towards teenagers.  However, their advertisements on social media initially only featured younger adults rather than older ones. The ads were also youthfully styled (splashy designs, minimalist lettering). Teenagers were taken by these advertisements, as it appealed to their eyes, but most older adults may not have been swayed.

In response to the controversy, Juul started to remove their fruity flavors from shelves.  The state of New York took it a step further and banned their popular flavors from being sold.  On September 19th of this year, Governor Cuomo even signed a legislation stating that the age to purchase tobacco and e-cigarette products has been raised from 18 to 21.  This did not sit well with many New Yorkers. People on social media spoke out about the way they felt, citing that there are “bigger issues to worry about,” such as gun control.

Kristian Lunnon, a student here at Thomas A. Edison High School, said, “I honestly don’t believe that [the ban] is going to do much.  If you’re willing to consume flavored Juul, then you’re willing to consume unflavored Juul.” When asked about the increasing cases of teenagers being admitted to hospitals due to lung failure, Lunnon says, “Obviously you don’t want anyone to be in the hospital, but that’s the risk you take when you vape.  In a way, you did it to yourself.”

The mission statement on Juul’s website states that while their device does contain nicotine and creates dependency, it is not recommended for nonsmokers. Several young people who Juul had never smoked cigarettes, but still decided to start vaping.

Jada F., a student who attends a different NYC public high school, said “I support the ban on Juuls because it has been shown to be addicting, especially when exposed to young people.  I think if less kids have access to Juuls, then more of them won’t have to suffer from addiction and other health issues. All flavors should be banned because irregardless of the flavor, it still contains nicotine.”

Other states are to follow suit and take action against e-cigarettes.  Michigan has also banned flavored products, and Massachusetts has banned all vape products.  Hopefully, we will be able to control this epidemic together, as a nation.

Hi, my name is Kareena! I’m a Cyber Security student, but I have a passion for writing. I enjoy journalism as it allows me to inform the public about important events. I also like to be social and make new friends! One of my hobbies is to go out and adventure around the city. Writing about my experiences is soothing for me.