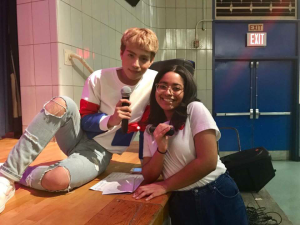 Edison’s very own Karaoke Night event took place on Friday, January 13th, 2017. Hosted by National Honor Society, the event brought in a large crowd eager to sing along and watch their friends sing on stage. With over 20 performances, the audience had a fun time engaging in song and music. Lead by two MC’s, Martha Hache and Kevin Baidal, intermission was filled in with fun mini-games, such as guessing a song given a short clip of the music.

As a career and technical high school, classes involving music and the arts are not as heavily focused on compared to career-oriented classes. Karaoke Night provided students with a chance to showcase their talents while in the comfort of singing along with their friends and classmates.

Not only did students perform, but teachers and advisers were encouraged to come up on stage to sing as well. When asked about National Honor Society’s impact on Karaoke Night, Mr. Ferri, who also performed that night, said, “Well the main point of Karaoke Night is to raise funds for National Honor Society, but if we get specific then it’s intended for the NHS induction ceremony at the end of the year and funding buses for chorus. They usually need buses to take them for their competitions and we repay them for their help by funding the buses.”

The event ended with group performances such as chorus and Edison seniors coming up on stage and singing to songs like “We Are Young” by Fun and “We’re All in This Together” from the High School Musical movie. Other performances were also impromptuly performed and were enjoyed by everyone who came to have fun at Karaoke night.

Senior Jessica Guncay said, “I love Karaoke Night! It’s one of those events where I can just sit with my friends and sing along with someone singing on stage. The lyrics on the screen make it even better as everyone in the audience joins in with the singer on stage.”

This event served to prove that music can bring people together at any location. By taking a break from studying and school, students were able to sit back and enjoy music with their friends and make even more memories as part of their experience at Edison.

My name is Samiha Azad. As a part of the general news section, I like to write about interesting topics that will catch the reader’s attention. Hobbies of mine include coloring, painting, and photography.