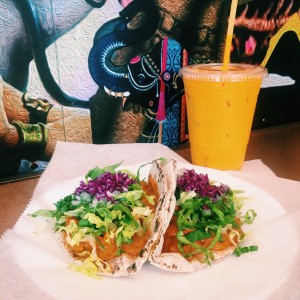 As migrants moved to New York City from all over the world, they have left their legacy through signature dishes. In a small, yet hip Manhattan eatery, Taco Mahal,  owners have implemented the most loved Mexican comfort food known as tacos into an Indian Dish.

You are given the choice of breads either naan or roti, following with the stuffing which varies from Chicken Tikka Masala, Lamb Kebab, Chicken Curry, Lamb Curry or Veggie of the Day.

Taco Mahal is nothing but a cultural adventure. Whereas the aesthetic walls

are based more on the Hindu side with well crafted paintings of the Hindu gods and goddesses, which is very pleasing to the eyes, especially as you’re enjoying your Indi-taco. The name however, comes from India’s emblem of love and peace, the Taj Mahal. This is exactly the way the owner wants you to feel as you’re in the presence of Taco Mahal.

Naimah Khanam said, “ I’ve tried the Chicken Tikka Masala Taco and it was great, you can literally every spice they added.  I think it’s different and creates a great attraction. People would be more interested to try the food since it sounds appealing, especially to me since I love Chicken Tikka Masala!”

Cassidy Sawh said, “I think a Mexican idea being implemented into an Indian dish would be an interesting idea. I never had two different cultures food combined so I would be curious to know how unique this taste.”

If you want to try this interesting Spanish-Indi cuisine, I suggest you take a trip to the fusion restaurant, Taco Mahal located at, 73 7th Ave S, Manhattan, NY 10014.

My name is Kelliana Seeraj, currently a senior majoring in the Web Design shop class. On my free time, I enjoy going on adventures to new places in my city to explore art and food. I aspire to try a dish from every culture out there. I’m super excited to share these with you all. Lastly, a fun fact about me is that I’m super dramatic.