Originating in France, the brioche (pronounced bree-ohsh) dates back to as early as the middle ages. The word brioche comes from the verb “brier,” diverted from the northern Old French word “broyer,” meaning to knead. Etymologists (one who studies the origin of words and their different meanings throughout history), say that “brioche” derives from two words: bris (to break) and hocher (to stir). Others say that the word is derived from “Brie,” referring to the location in France which also was created Brie cheese. They also say that the original recipe was a pastry made with Brie cheese. 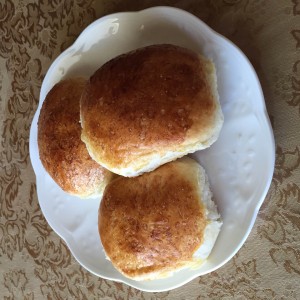 The basic ingredients of the brioche is yeast dough, eggs, butter and milk, which makes it a lot different from the average slice of bread. Over the centuries, there have been many different variations of the brioche.

Today there are two main ways brioches are prepared: savory like a loaf of bread or buns; or sweet like donut, sometimes called the brioche donut or bronut. Brioches in the form of a loaf of bread or buns are often eaten like you would with with your everyday sandwich bread – mainly to make sandwiches filled with meat and/or vegetables. As a sweet, the brioche can be made and served with other sweet additions such as fruits,  jams or icecreams, along with extra sugar added.

I tried out the brioche rolls from Lulu’s Bakery in Fresh Meadows, New York. They had a very neutral flavor: savory, yet they had a slight touch of sweetness that would be good for anyone that doesn’t like too much of an overpowering sweetness. I prefered eating the brioche rolls plain, but you could add whatever foods you’d like to satisfy your tastes.

I am looking forward to trying brioche donuts from Mah Ze Dahr’s bakery as they were on Tasting Table’s NYC Top Ten Donuts list in April 2014. Their location on 28 Greenwich Avenue, New York, NY 10011 is opening this coming December.