The viral feud that started with one Instagram “like”, that captured our hearts and minds, a battle between two megastars: Soulja Boy and Chris Brown. A showdown for the ages.

Soulja Boy is no stranger to starting feuds, but now he has taken a regular “beef” into a full-fledged boxing match. The fight ignited after Brown allegedly threatened to fight Soulja Boy for liking a picture of Chris Brown’s ex, Karrueche Tran, on Instagram. 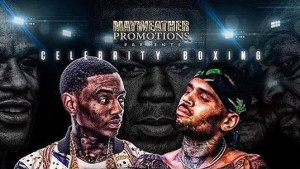 While the details of the fight are murky, it’s slated for March. The fight was originally handled by Mayweather Promotions, however in recent weeks, Soulja Boy has expressed his displeasure with “The Money Team” and has taken full control of promoting and setting up the fight.

The fight has no official location, however Dubai is being considered to be the main location given the lenient rules and regulations there compared to the United States. There has not been any official statement confirming the location.

The training of both Chris Brown and Soulja Boy have seen parallels. Soulja Boy has been heavily criticized by the general public for his unorthodox training methods showcased on his Snapchat. Soulja Boy weighs significantly less than Chris Brown, but chooses to do cardio which is known to be used for weight loss.

Mr. Craan, a physical education/fitness teacher, stated, “Cardio is essential for boxing. It is essential as it builds up stamina and keeps you going 100% throughout each round consistently.”

Chris Brown on the other hand has been seen practicing his combos with his right hook along with his footwork, putting less emphasis on cardio, but more on technique. Chris Brown has been seen regularly sparring and engaged in sports activities in comparison to Soulja Boy.

With such publicity does come scrutiny. The whole fight seems to be a publicity stunt for both parties involved. With no set date, venue, and location the whole fight has been up in airs. Avid boxing fan and Edison teacher, Mr. Haripersaud, said that “It’s opportunity for both of them to promote themselves. They’re not really serious about it, it’s just a money making fight.”

Whether this fight will ever undergo is the main question. The opportunity is there but there’s a lot of hearsay and flipping back and forth.

Will the fight happen? Will Soulja Boy win? Or was this all a publicity stunt?

My name is Samith Afzal and I am a part of the Features section in The Edison Light. I’m a huge New York Knicks fan and I love listening to Drake. I love driving out to new places and documenting my adventures on my DSLR camera by vlogging bits and pieces to make a full-fledged video. I’m all for having a great time and making the most out of my day.