Netflix’s Black Mirror has diverted from its seasonal releases and released a movie, an interactive one nonetheless.

Black Mirror is known for its theme of ‘technology at its worst.’ With Bandersnatch, they took it to new heights. Alternate endings are available, based on the viewers music taste or other detrimental factors. Periodically, a black outline will appear around the screen, presenting the viewer with two choices. The viewer has to make a choice within the window of time, if the viewer neglects to choose, the movie will choose for the viewer.  This gives each viewer a more individualized experience.

Stefan, an aspiring gaming developer, was inspired by the book, Bandersnatch, to create a game that allows its players to choose their own paths. He’s being pressured by a big company to finish the game, which never seems to go right. The choices start off simple, choosing between two boxes of cereals. However, as the plot progresses the choices become more pressing. Stefan’s perception of reality becomes increasingly distorted as well. There’s a potential of the viewers choices rewinding the movie back to a specific spot. The viewer will know they have reached an end since the credits will begin to roll. 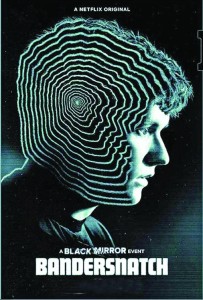 Fionn Whitehead’s adaptation of Stefan was captivating. I never really thought being able to read emotion through the eyes was possible until I witnessed Whitehead’s performance. His face may seem stoic, but his eyes are a different story. His portrayal of a 19 year old computer programmer who’s spiraling out of control is creepily intriguing. Also, the special effects and cinematography of the movie were well done, especially in one particular scene where Stefan takes hallucinogens.

However, Netflix is being sued by Chooseco LLC over Bandersnatch. Chooseco is a small publishing company that has released several interactive books for young adults. They’re demanding at least 25 million dollars of Netflix’s profits on the grounds of misappropriation. The co-founder of Chooseco, Shannon Gilligan, claims that their books are being misbranded by people due to the movie. Chooseco’s books have zero affiliation with Bandersnatch, however, people are putting them together. Gilligan further claims that parents are expressing concern over their Choose Your Own Adventure books being associated with Bandersnatch due to Bandersnatch’s not so children friendly nature.

The movie builds on the potential dangers of technology on humanity. In typical Black Mirror fashion, it advises caution against technology. Bandersnatch is rated TV-MA, MA stands for mature audience.This adventure is not for the faint of heart.