The story of the late Mac Miller is exhibited through his posthumous album, “Circles,” in collaboration with Swimming.

Malcolm James McCormick, known as Mac Miller, a driven white rapper from Pittsburgh, made a name for himself with his genuine talent. Miller’s career started in 2011 and unfortunately, he passed away by an accidental overdose in September 2018. 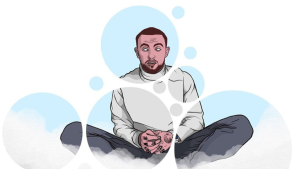 Miller released Swimming, an album that was put out after his breakup with the singer Ariana Grande and just two months before his passing. “Circles” was an unfinished album he was working on which was going to be a companion to “Swimming,” a two-part project being called “swimming in circles.”

Jon Brion, a producer who collaborated with Miller, and Miller’s family announced that “Circles” will be released on January 17, 2020. Brion finished the “swimming in circles” project based on his work with Miller and their conversations. Brion was the perfect person to complete the album, finishing the songs that Miller wanted to present his interests into something he would’ve to consider complete.

Leana Go, a senior at Edison, said, “Jon Brion was very intellectually intimate with Mac Miller and so I think he was the best-fit person to carry out his vision.” He works as a co-producer on most songs and his work makes the songs appealing without compromising Miller’s vision for them.

One reason why his music was adored by many was because of his vulnerability. Miller wanted to create art that ventured to battle substance abuse and depression. He was fighting dark thoughts, but at the same time trying to be at peace and resisting to apologize for his mistakes.

Go stated, “There are certain songs that allow you to connect with the artist. It allows me to express my emotions without putting them out into the public. Miller was one of the few… Swimming resonated with me during a dark time.”

Many of his songs on “Circles” reflect his changing mental state. Some of the lyrics also hint at death. “Good News,” that came out early January, sets that tone. Miller sang, “There’s a whole lot more for me waitin’ on the other side.”

Go also said, “Miller and his music have evolved in the past 10 years, and his story inspires other people dealing with the same issues he went through. It gives them a sense of hope that they aren’t alone and that’s what Miller wanted to do.”

Regardless of knowing how his story ended, his vulnerability and honesty as an individual who presented that through his music, made people root him to make it to the other side. Many millennials relate to the irritation and confusion Mac Miller was experiencing. His music reflected many emotions allowing us to understand the world and ourselves.

Swarnali [swar-nah-lee] noun: a full time music and food junkie. I want to travel the world and bring my creative ideas to life. l aspire to study computer science that will fulfill my nerdy need.