Released on September 29, 2017, Studio MDHR’s Cuphead was released to massive critical appraise, and rightfully so. A combination of arguably the best music, animation, and gameplay ever seen in a video game, Cuphead is set to be remembered as one of the greatest video games of the decade.

The game features a simple story centered around two anthropomorphic cups, Cuphead and Mugman, who make a bet with their lives against Satan and lose. In exchange for their lives, they end up becoming Satan’s personal debt collectors. As expected, each confrontation with a debtor always ends with Cuphead and Mugman fighting for their lives. Along their journey, they start to wonder if maybe they can use their strength to stand up to Satan himself.

Cuphead is an action-platform game, similar to the likes of Mega-Man and Contra . What sets it apart from the rest is it’s unique look. Cuphead shows off it’s influences with honor and pride. Studio MDHR took inspiration from 1930s cartoons, being specifically reminiscent of the work done by Fleischer Studios (The Studio famous for the creation of Betty Boop). Astonishingly, Cuphead ’s visuals were all meticulously hand drawn to serve an authentic look, similarly to how artists and animators had to hand draw their work in the 1930s. 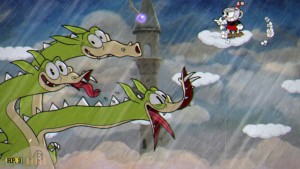 Cuphead has also received high notoriety for its grueling difficulty. Although the game’s artstyle gives off a friendly children’s cartoon vibe, C uphead is capable of making any adult throw a tantrum. The game has a control scheme that allows for it to be easy to play but difficult to master. Cuphead consists of boss fights containing multiple stages to each fight. You are required to learn each stage of the fight in order to have a chance at surviving the bosses’ varied and unique attack patterns. Most of the “boss fights” in the game can be completed in about 2 – 3 minutes, and yet it can take around 15 – 60 minutes to actually beat the boss. This allows for countless moments of frustration where you could have sworn that the boss was just a few hits away from death.

“This game is evil. It’s by far, one of the most difficult games I’ve ever played… It was still worth it though, just to experience each new level.” – Jack Castillo, a 17-year old student who frequently plays video games.

Cuphead ’s trifecta of perfection is completed with its music. In order to truly immerse the player in the 1930s setting, the soundtrack is purely made up of big band, swing, and jazz music. The soundtrack was created by 42 musicians, including a 13-piece big band orchestra, various soloists, and ragtime pianists. Each fight in the game has a complete 3-4 minute piece that progresses and changes as the song goes on, matching the changes that each boss develops throughout its fight.

Studio MDHR’s debut game, Cuphead , set records for selling 1 million copies in its first 2 weeks. It’s currently sitting at over 2 million copies sold, surpassing the wildest expectations of the developers. Cuphead is available on PC and Xbox One, with rumors of a Nintendo Switch version on the horizon.